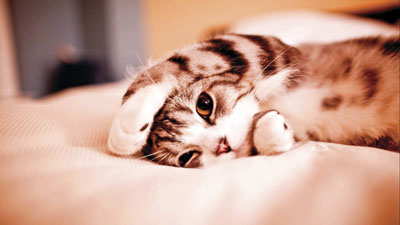 My closet rattles. One door is slightly ajar. Something is being batted about on the floor inside. A paw is visible now and then when it comes close to the bottom edge of the door. Once a nose with white whiskers peeks out, then shoots back in like a jack-in-the-box.

My tiny new kitten was a street waif. She arrived complete with sticky streaks on her underside and chin. She arrived with fleas and one sore eye—the green one. The other eye is blue. There is a perfect fish outlined in white on a charcoal colored patch on her back. Her very long ears are a pale peach color and her head is big on an extremely thin body. Already after four days, she is starting to acquire a small pot belly from regular meals. The vet says she is four weeks old, but her body is so tiny and weightless that she seems more like a large mouse than a cat. I fear stepping on her and in fact have, but when I did, she made not a peep and her bones seemed to spring back like a sponge.

Her long eye whiskers were singed back almost to hair level in an unfortunate encounter with the gas burners on my stove. She is so fast that she leaped up on the counter before I could stop her. In similar fashion, she had walked across the bubble wrap Jacuzzi cover that floated on top of the water, so light that she made it from one side to the other without sinking. Another time, she leaped from the back of a chair to the top of the high metal display case, where her claws made little ingress into the metal and where for a few seconds she clung from the edge like a mountain climber before falling to the tile floor five feet below. Five minutes later, her head peeked up from the opening at the top of the shade of the lamp on the telephone table. This house is her new world, and she is the Magellan of cats.

Two weeks before, I had found my cat of 15 years floating lifeless in my pool. It was horrible. I had seen the cat born and his burial seemed a reversal of the birth process. We buried him in the garden wrapped in his favorite silk sari from the end of my bed, and with the mouse-shaped doorstop he loved to bat around the house. I buried with him my intention not to have any more pets for a while. None could replace him.

Then, two weeks later, a mouse had streaked across the street in front of me and entered the store I was about to enter. Upon closer examination, the streak had been a tiny kitten that had vaulted into a huge display basket of scarves, and it hadn’t taken too much encouragement by the shop owner to get me to promise to stop back before we left that night to see if the kitten had been claimed by an owner or adopted by someone more determined to have a cat than I was.

Every animal I’d ever had in my life had come to me by accident or by its own volition, so when this placeless cat appeared, I had by habit accepted the karma and now she sleeps each night on my chest or on the pillow by my right ear. I am slightly allergic to her, and although she doesn’t flinch when I cough and sneeze, when I get up for a drink of water, she meows. This word perfectly describes the sound she makes. She is loud. The sound of her echoes through my high-ceilinged brick-and-stucco house. “Meow, meow, meow, meow,” but somehow it seems to belong here—to fill out the silence that might otherwise only be filled by the sounds of the television or the computer or the stereo—sounds that do not breathe or jump up to the arm of my chair or respond to a reassuring pat or the sound of the can opener. With the appearance of this newest little intruder, once again, my house has become a home.

New Lease Life - April 2011
A NEW LEASE—on Life! By Judit Rajhathy, B.A., RNCP, D.Ac. Expensive Urine - Not!   Is your food grown locally year round without the use of insecticides