I caught the #9 bus down the hill from University of San Diego High School. Our all boys Catholic school was two bus rides from home. The #9 took me to the plaza downtown where I would transfer to the #11 bus which in turn left me three blocks from home. When I boarded the #9 I asked the driver for a transfer chit which got me onto the #11 for my original fare. With the chit in my pocket I could catch the bus anytime before midnight.

Sometimes I would walk the four blocks to the public library to do my homework assignments; sometimes I stopped at the second hand paperback bookstore along the way to the library.

I knew exactly where the exotic paperback section was. I would pick up the dime novel with the most sensuous cover I could find. I sped read to the dirty part and stood there transfixed as I anxiously read in great detail descriptions of activities I could never imagine on my own. I tried to act as inconspicuous as possible as I did not want the shop owner to know what I was up to. Although there is no specific commandment prohibiting the reading of lusty novels I was pretty sure I was transgressing one of God’s holy laws. After a few minutes I casually set the book down in its place and untucked my shirt so as not to let the world outside know my body’s response to the reading.

Half and hour later I boarded the #11 Market Street bus. As I sat in my seat I relived what I had read in vivid detail deciding to deal with the guilt I felt and the confession I would have to tell the priest later. I drifted off to sleep in the arms of a beautiful well built nymphomaniac. I awoke two stops past mine, jumped out of my seat and reached the cord that ran along the ceiling of the bus and tugged it to alert the driver to halt at the next designated bus stop. Mumbling at myself I started the extra long walk home. On my way my conscience kicked in and decided to recite the ‘Act of Contrition’ a confessional type of prayer that would hold over a sinner until he could get to a church. The prayer ended with the words ‘I firmly resolve with the help of Thy grace to sin no more and to avoid the nearest occasion of sin’. “Whew” that was a load off my mind!

My extra long walk home took me past the Mayfair supermarket. The store had a large magazine counter. I walked in and headed straight to the ‘Raw Police and Detective Stories’ section. The magazines had these great ads of women endowed by God modeling double D sized bras, girdles and black fishnet stockings. Fifteen minutes later I untucked my shirt again, composed myself and started the last leg home. A block from the store I made the sign of the cross and started,” Oh my God I am heartily sorry for having …“.

Joyful Musings - August 2009
Joyful Musings By Joy Birnbach Dunstan, MA, LPC, MAC Bring Back That Lovin’ Feeling   There may be no better feeling in the world than being 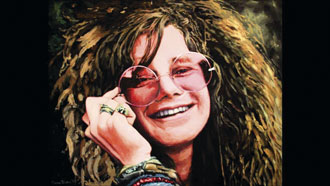