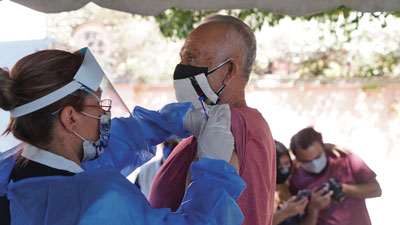 There is an old saying, “In the land of the blind the one-eyed man is king.” During this time of COVID my quest is for some “one-eyed” truth. My wife and I have been stuck in Ajijic for over a year wanting to return to our Shell Beach, California home. We are Americans of Canadian ancestry and are therefore planful people who want “for sure,” not “maybe.” I heard that the Brits have a vaccine that only requires one jab. (We Americans call it a shot.) The Brits are still smarting over the Concord cheer, “The shot heard round the world.” Is that why they call it a jab? “The Jab heard round the world.” That sounds silly.

Initially we were confused by the mistaken thought that we would have a choice of vaccines but we forgot we were in Mexico and that one would be chosen for us. It was to be the Chinese Vaccine. We were happy to get it. The night before the day of the shot we were entertained by a streaming of the city council meeting from our California hometown, Pismo Beach. They discussed planning of water reserves for possible, future shortages. We noted how planful this was compared to the Mexican way.

The shots (or jabs) were to be given at the Ajijic malecon. Our bilingual daughter would go early to save a place for us. It seemed like a good plan to save us from a long wait in line. We got there with our folding chairs about 10:30 a.m. The lady behind us told us, “We got here at five a.m. and haven’t moved an inch since.” We decided it would be best to take the hint from our Mexican friends and try to enjoy the process. For the Mexicans in the crowd this was to be a fiesta to be enjoyed like everything else in their lives. They visited old friends and soon-to-be friends in line making plans for get-togethers after the shot while the Gringos stood like they were on a one-way trip to Auschwitz.

The Brit behind us exclaimed, “The line is so long I can’t even see where it begins.” She asked the Señora behind her, “Can you see the end of the line?” The Señora responded, “There is no end. Why do you care about what is behind you?”

Looking forward I spied a Pittsburgh Steelers, souvenir, picnic cooler. I had no doubt it was filled with bottles of Corona beer. I imagined the cooler was set in our path as a place-saver for a beefy, Steeler defensive tackle. I knew I was mistaken when a beautiful Señorita came up to the cooler bag, opened it and had a drink of water from the jug inside. “Hi,” she said, “I’m Rebecca Ramirez. I’m here to assist the people in wheelchairs.” She gave us a broad smile and exclaimed, “Isn’t it a beautiful day?” Joan and I admired her bi-lingual skills, her continuous smile and her charming, delightful company. I wondered if she continued to smile like that even when she was asleep.

For those of us who had been in the military and had experience with a large number of people being serviced by a small number of specialists we were prepared for the “Hurry-up and wait” pace. We enjoyed the Rose Parade atmosphere as we had on January Firsts in Pasadena, California. Happy crowds, vendors selling BLT’s, apples, bottled water and bubble wands. It was a fiesta.

After four hours in line we were moved en masse into large tents. A soldier dressed for combat, armed with a submachine gun and other lethal weapons stood partially hidden in the shade of a tree. His half-lidded eyes continued to scan the line. His presence assured the Canadians that order would be maintained. We were briefed regarding this last phase and the purpose of the whole, damn thing. They gave out numbers. Mine was 38. We waited, seated in a row of folding chairs still hoping to get shot.

Our long wait was rewarded when our shots were professionally administered by a doctor-led team of three experienced medical assistants. We were so happy, almost giddy. At the end, Joan said, “I wish that they would have given us a certificate of completion or a merit badge we could flash. We have accomplished something akin to the evacuation of Dunkirk.”

Our COVID-shot day ended with a perfect conclusion. We saw our new friend, Rebecca seated on the Pittsburgh Steelers cooler keeping herself busy with her Smartphone. As we walked to the waiting car, Rebecca, still smiling, softly wished us, “Que vaya Bien, Señores.”