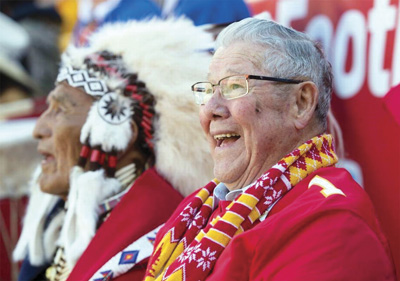 His was a life right out of the Great American Success Story, but with more than a half-dozen unique twists, the first being that he came from a race that has been called “the first Americans.” Born and raised near the Sac and Fox Indian reservation in Oklahoma, he would go on to attend Haskell College in Kansas, the first Indian college financed by the federal government—a belated act of generosity toward a race of Americans that had long been dealt a cruel and unforgiving hand. (It was not until 1924 that Congress would grant Native Americans the rights of U.S. citizenship.)

At Haskell, he would discover sports and his God-given ability would, in short order, bring him under the tutelage of the legendary coach Pop Warner, today remembered for making football America’s favorite sport among its young boys.

Soon, Haskell was playing much larger and far better—known colleges—and beating them. The young Indian was a one-man wrecking crew and before his second season had ended, he was considered the finest running back in the entire country. In time, he was also considered the finest all-around athlete, excelling in not only football but track and baseball, as well.

Toward the end of his senior year, he was hoping for a coaching job at a small college but lost out to a rival sports hero. Deeply disillusioned and thinking he had lost the job because of his Indian ancestry, his competitive spirit was revived only when “Pop” Warner told him of the upcoming 1912 Olympics in Stockholm, Sweden.

Try-outs were being held all over America, and when the finals were announced, he had made the American team, qualifying for several events. Later, in Stockholm, he would do well in those events and then, though exhausted, he entered two long-distant events, one of 5,000 meters, the other of 10,00 meters—and amazingly, won them both. At the closing ceremony, the King of Sweden, handing him his trophies, said,” Jim Thorpe, you are the greatest athlete in the entire world.”

But at the height of his fame and success, Lady Luck threw him a curve-ball. Seems that during his years at Haskell, he had played Class D baseball during one summer vacation for some seventy-five dollars a month plus room and board. That, in the unforgiving eyes of some had made him a professional—and he was ordered to give back his Olympic trophies. Then bad luck, as it sometimes does, hung around for an encore. In short order, Thorpe ‘s son died, his wife left him and toward the end he was, sadly, performing as a whooping Indian War Chief in a sleazy side-show in Los Angeles.

That year, 1936, Los Angeles was hosting the World Olympic Games and the story goes that “Pop” Warmer, Thorpe’s old friend and coach, happened to be in the city for the event. Tracking Thorpe down, he took him to the opening ceremony at the Los Angeles Memorial Coliseum, a moment that must have brought back bittersweet memories to the now middle-aged and badly dilapidated Jim Thorpe.

Very little is known of Thorpe’s last days. He died in 1953, having spent his final days living in a small trailer in Lomita, California. But the world has not forgotten him, and today his name is synonymous with excellence in the world of sport and few can argue that once upon a time, for a brief and unforgettable moment, he was truly “the greatest athlete in the entire world.”

PS: His story was revived in the 1950’s when Warner Bros. Studio made the excellent Jim Thorpe--All-American, which starred Burt Lancaster, himself a terrific athlete and one of the very few actors who could have done justice to the role.