Guest Editorial By Margaret Van Every 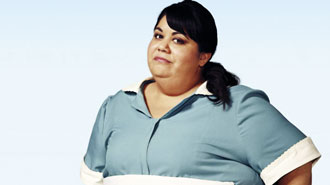 I was ten when it first occurred to me that I had a responsibility, if only to myself, to clean up for the maid. My mother had recently died and my dad got Louise to come and clean for us. He also explained that we had to clean up before she came because she had no idea where to put things. I was inspired to write a poem, so amused was I by the irony of having to clean up for the one we hired to do it for us. The poem went something like this:

and Louise will be coming

to clean the house. I must

clean up for her before

she arrives or she will hide,

lose, or misplace my stuff

for that is her duty, which

includes not only to clean up

but to straighten up. I

am a very crooked person.

So at a tender age, I became a lifelong victim of this irony and helpless to overcome it. I might have done so with therapy, but this kind of craziness, though it afflicts almost every woman I know, has not been identified as a psychological disorder. It’s something we each must deal with in our own way. We cannot blame the maid. There are others, from shame, who feel they must also clean up their dirt before the maid arrives so she won’t judge them as filthy. However, that is not my particular problem. Making our dirt disappear is the only reason we hire her. Washing floors and windows are chores I’ve never put on my to-do list.

After I had my first child and was frantic trying to be a mother and do all the cooking and housework, we hired Virgie to come and do those things to free me up to play with the baby or just read a book in case the baby was napping. As you could predict, given my weakness, Virgie played with the baby while I did household chores. Why was I such a sucker, I repeatedly asked myself. I figured it must be something subconscious like un-expiated guilt for having been born white, the sins of slave-owners having been visited on innocent me, generations removed. I didn’t want anyone who worked for me to feel lorded over or to think I considered myself superior just because I paid them to clean our commodes. Class guilt was involved, too, because I commanded the money and they needed the money.

And so years later we moved to Mexico where I could reapply my old neurosis to a new culture, and it’s the Mexican maid who inspires this essay. By the way, we would never call her a maid, not that she would mind, but we don’t want her to think we regard her as inferior. And so she is m’hija when I address her to her face and mi ayudante when I refer to her in the third person. Before she arrives, we defensively put our stuff in order and try to leave the house for as long as we can to get out of her way. My desk, in permanent and total disarray, has a note on top where she can’t miss it: Favor de no tocar.

She stands a mere five feet tall and works without pause for four hours, except for the quiet moments she allows to geometrically fold our unruly plastic bags under the sink into tight, perfect, inscrutable squares, a uniquely Mexican origami. We don’t like having to undo them to deposit our trash, but, well, it’s art and we cannot disparage the artist.

When her day is done, the house sparkles its gratitude from five feet up all the way down to the gleaming floor. Her cleaning rises only to the level of her vision, and so after she leaves I discretely apply the bristles-on-a pole to the fan blades and disturb the high spiders from their webs. I’m the one who moves the furniture back where it was and washes the rags with which she dusted and scrubbed.

You are thinking, this is pathetic, what could possibly be the problem this time? People named Lupita are brown not black. Ah, but that is the problem. You see, we stole half the brown peoples’ country, though Lupita probably doesn’t know it, and if she does, she bears no grudge. But I know it and for that I am willing to be humble before her and serve her, however she requires.