*Now on Amazon/Kindle and in quality soft-back under the title Against All Odds.

A Novel by Alejandro Grattan-Dominguez
Reviewed by Dr. Michael Hogan 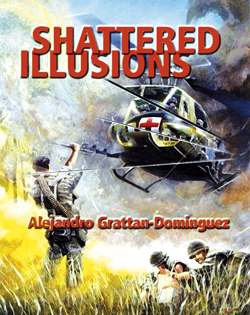 A compelling novel that captures the spirit of the 1970’s

“Please turn out the light and come to bed,” my wife implored as I savored the final pages of Alejandro Grattan’s new novel, Shattered Illusions. It is a compelling read, taking us on a journey from the steaming jungles of Vietnam to the equally steamy and dangerous “selvas” of Central America.

This is the story of Steven Donleavy, a decorated helicopter pilot who returns from Vietnam with a brutal leg injury suffered in combat as well as a psychic wound because of his failure to rescue stranded comrades that he had to abandon during a firefight lest his lose his chopper and all aboard. His return home is short of glorious and, because of his gimp leg, he is only able to find work as a pilot for a seedy transport company flying outmoded planes.

Steven longs to connect with his childhood friend and fellow Vietnam pilot, Artie Casillas, with whom he has lost touch and whom he cannot locate when he returns from Nam. He hears rumors that he is flying planes down in Central America and this is confirmed by a DEA agent who informs him that Casillas is flying drugs for narcos. The agent entices Steven to go to work as a pilot with his friend (while also working undercover for the DEA) to rescue Casillas and clear him of criminal charges.

Once there, Steven connects with his friend and discovers that the drug-running operation is being used to fund a revolutionary movement but that the effort has been co-opted by the CIA. He falls in love with Marlena Salazar, an attractive rebel soldier, and now finds himself trapped between two powerful forces. How can he rescue his friend Casillas without betraying his new-found love and the revolutionary cause? How can he escape death at the hands of the rebels if discovered, or avoid prison in the US for him and his friend if he fails to accomplish his mission? Complications abound.

The novel has faint echoes of Hemingway’s For Whom the Bell Tolls, with courage and integrity (not to mention true love) pitted against the ruthless indifference of war and conflicting ideologies. The Contra Affair and Colonel Oliver North also come to mind as events unfold in this Central American republic engaged in a revolutionary struggle which will be ultimately betrayed by some of its own people.

For those who enjoyed Grattan’s other compelling novels such as The Dark Side of the Dream and  Breaking Even, this long-overdue work of international fiction will come as a special treat. Grattan has sharpened his already-considerable narrative skills and has delivered a compelling novel that captures the contradictions and tensions of the 1970s as Vietnam ended and a new unsettling period of hotspot hostilities broke out in the Americas. We now inherit the whirlwind of that violence as the children of those countries flee the terror which was unleashed so many years ago.

Ed. Note: Dr. Hogan is the author of the highly-acclaimed The Irish Soldiers of Mexico and Lincoln and Mexico.