CELSITO—A Prince Amongst Paupers
—An Immigration Story of Sorts— 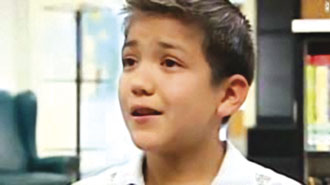 Many, many years ago (and seemingly in another lifetime!), two friends of mine in Los Angeles were thinking of buying some property in Ensenada. My wife and I would occasionally accompany the married couple down on weekends to scout out a suitable location for what they hoped would someday be their dream retirement house. During these expeditions, we always stayed at the picturesque Rosarito Beach Hotel, and it was there that I first met a street urchin who has remained indelibly fixed in both my mind and my heart.

Celsito was about ten years old, and very frail of frame. Yet he had lustrous brown eyes and a voice deep as a bass fiddle and just as melodious. He was also a very handsome kid.

“Señor, I watch your car?” he asked me one morning in the hotel’s parking lot.

Nursing a bit of a hangover, and overly familiar with this worthless sales pitch, I rebuffed him with, “Watch it do what?”

“I keep this pretty car from stolen.” he answered with a confident smile. Already he was dusting off my car with a rag.

“Oh, how can you do that?” I barked, already feeling trapped by his soft brown eyes which were tracking me like radar.

“If some peoples try to steal it, I yell loud, police come soon,” Celsito replied, and immediately bellowed out a shattering demonstration of his lung power. As the ringing left my ears, I chuckled. The little Mexican had plenty of moxie.

Soon thereafter, he became our unofficial guide. There didn’t seem much about Ensenada he didn’t know, and over the many weekends that intermittently followed, he led my friends, along with my wife and me through the city’s thickets like an intrepid white-hunter steering a safari safely through the densest jungles of darkest Africa.

He was also the most audacious negotiator I have ever met. No place or person was beyond his purview. Two examples: one night my wife and I decided to catch a late movie. But arriving at the box office, we were informed that the picture had already been running for more than fifteen minutes. I shrugged and forked forth the admission price for the two of us, as well as for Celsito. But at this point, the little guy took charge.

Were we not allowed, he sweetly asked the cashier, a slight discount? He politely pointed out that since we had missed some fifteen minutes of the movie, perhaps a reduction in price would be most fair to all concerned. The cashier, flummoxed by this unusual tactic, could only sputter that each ticket had to be paid for in full. She did, however, agree to let Celsito in for free.

Another time, in a fancy restaurant, he tried to bargain down the prices on the menu, arguing that because my wife and I weren’t really all that hungry, we would probably leave plenty of food on our plate, which could then be distributed to the underpaid people back in the kitchen. But this time his boldness backfired. The owner angrily ordered him from the cafe, citing some technicality about how all patrons had to be properly shod. Celsito was dressed almost in rags and had never owned a pair of shoes.

The following morning, my friends and I bought him a good pair of shoes. But our anemic burst of generosity only seemed to embarrass him. Later I found out why. He didn’t have the faintest idea of how to tie the laces.

Some week-ends later, realizing that as talkative as he was, he had never said a word about his daily mode and manner of existence, I asked him where he lived.

“With my abuelita.” he murmured, looking rather bored by such a domestic inquiry.

“With your grandmother, huh? But where?”

My friends and I had already decided to set up some sort of an educational fund for him. It seemed downright criminal that such a bright and resourceful boy was not in school. “So where do you and your grandmother live?” I repeated. “I want to go see her.”

“Oh, we live in nice house. Toilet flushing and everything. But my abuelita too old to talk. Ears, eyes, head, all bad.”

I let the matter drop for the moment, but later in mentioning him to someone at the hotel, I learned that the boy had no grandmother and no house, flushing toilets or otherwise. He lived, far as anyone knew, on the street.

It was then I decided to try to adopt him: an impulsive and perhaps foolhardy decision, but luckily my wife had also fallen in love with him—and since we could not have children of our own, she seemed vaguely amenable to my reclamation project.

A lawyer in Ensenada advised me that if indeed the boy was homeless and without family, there should be no great obstacle in legally adopting him. The tougher task would come in getting him into the United States. I was prepared, however, to cross that bridge when I came to it.

What I was unprepared for was Celsito’s reaction. Even after I pitched him on all the marvelous opportunities that awaited him in Los Angeles, he seemed somewhat less than enthusiastic. Finally, over a horchata (a sugary rice drink to which he was somewhat addicted), the truth came out.

“Yes, don Alejandro, you like me now. I make you to laugh and sometimes even save you some pesos. But when I go with you and later do no good in school and just cost you many monies, then you and the Señora will have shame for me... also there is persons here who need me. No, better I stay in Ensenada. Then always you remember me with some smiles, eh?”

Naturally, I was curious as to exactly who these people were who seemed to need him so badly. But the expression in his eyes discouraged further discussion. It saddened me that I had so abruptly lost the son I had always wanted.

Sometime later, after my friends decided to buy property in another part of Mexico, I informed Celsito that we would not be coming back to Ensenada for quite a while. My wife and I took him on one last shopping trip, and it was then that I had my initial inkling of who he really was. The first clue came when I noticed that many of the clothes and shoes he selected that day were some sizes too small for him. Curiosity aroused, I decided, after we had bid him a final and sad farewell, to follow him. It was still early morning as our cab trailed behind him at a discreet distance. First he stopped in a bakery, (we had left him with the equivalent of several hundred dollars) and then he hurriedly walked on for a few miles until coming to a gulley south of town, just past the city garbage dump.

Down in the pit of the deep ditch sat several teetering card-board hovels. The foul-smelling, refuse-littered canyon seemed deserted. But as Celsito started down the steep hill, a few children came out from the huts. Happily passing around the loaves of bread he had bought, he then started to hand out the new clothes. The children were in rags, and many appeared undernourished; but for the moment they were smiling and laughing like middle-class kids greeting a beloved older brother who had just come home. It was a somber, yet curiously uplifting sight which I have never forgotten.

That was the last time I ever saw Celsito. Yet over these past several decades I have often thought about him; and always (just as he had hoped) with “some smiles.”

He would be about forty by now, and I have no doubt that if he still lives in Ensenada, he’s today its most enterprising entrepreneur, if indeed not the town’s mayor. Now, perhaps that is a bit optimistic, yet over the course of a long roller coaster of a life, I have noticed that the best people almost always change only for the better.