Robert McNamara and the Vietnam War 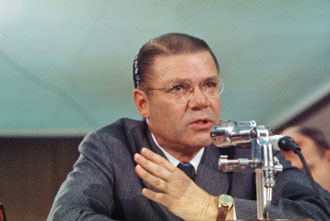 The late Robert McNamara’s best-selling book, In Retrospect, recently went into another printing, which has prompted us to republish our review of the book which originally ran soon after its initial release. The lessons of the Vietnam War are especially relevant now, as some politicians are screaming for sending a massive number of troops into various parts of the Middle East. (Ever notice how almost never are any members of these politicians’ own families sent off to fight and die in these wars of choice? Vice President Joe Biden’s son, Beau, was a rare exception.)

Vietnam. That name, even now, so many years after the fall of Saigon, still possesses the power to flush forth tears of anger, remorse and shame in the hearts and minds of millions of Americans. The Vietnam War is a psychic wound that has never healed

Recently, that wound was reopened by a literary bombshell. Robert McNamara, who as Secretary of Defense under John F. Kennedy and Lyndon Johnson, was one of the chief architects of the war, and has written a book which again turns friend against friend, liberal against conservative, even father against son.  Yet when the present furor dies down, McNamara´s  book will be recognized for what it is: an act of atonement—and an ominous warning.

In Retrospect is currently besieged from all sides. Conservatives are furious that McNamara believes we were “Wrong, terribly wrong” to have been in Vietnam in the first place; liberals are indignant that it took the former Defense Secretary all these years to finally make known opinions he covertly  held as early as 1965.

Why McNamara changed his mind about the war, and why he has decided to so publicly disclose his reasons for doing so, make for a book that is painful to read. For behind every mistake in judgement lurks a casualty statistic, beyond every belatedly-perceived truth a sobering reminder that the “best and brightest” of any country and any generation are as susceptible to error as most of the rest of us.

In the opinion of many, all the signs that we would encounter only dead-ends in Vietnam were there even in the 50s. Our first mistake was in assuming the infallibility of the so-called Domino Theory, i.e., if South Vietnam fell to the Communists, all of Southeast Asia would surely follow. Yet when France pulled out in 1956, nothing of the sort happened. Nor has it happened since. Another error came in presuming that Red China would enter the war, though Vietnam and China had long detested each other, indeed had been sporadically fighting one another for hundreds of years.

Thus, erroneously determining that the defense of South Vietnam was absolutely vital to our national interests, the US imposed, either in ignorance or arrogance, the Diem family—a discredited Catholic clan living in luxurious exile in New York City—upon the head of the corpus of a Buddhist nation. We also failed to recognize that Ho Chi Minh was a national hero in both South and North Vietnam; indeed, our own State Department had referred to him as the “George Washington of Indochina.”

After the Diems were deposed, we frantically propped up one puppet politician after another in Saigon. But none could succeed in winning the hearts and minds of even their own people. Not that they tried very hard—most seemed far more interested in the cocaine and heroin business, as well as the lavish trappings of power and the size of their Swiss bank accounts

Another troubling sign was that America’s upper-classes had apparently decided the war wasn’t worth the blood of their own sons. That left much of the killing and dying to the poor and middle-class whites, blacks and Hispanics who could not afford the price to dodge the draft.

But the war would finally cost even America´s elite more than they were prepared to pay: almost sixty thousand dead, hundreds of thousands wounded, many thousands of  subsequent suicides, and tens of billions of dollars. The war would also take from many of us the great pride we had always felt in our country.  We became disillusioned and disgusted; finally deeply cynical. Later, what the war had not destroyed of our faith, Watergate finished.

That national sense of cynicism, now more pervasive than ever, is part of the reason McNamara wrote his book. The men who plunged us into one of the most tragic experiences in all our history, he reminds us,   were not egomaniacal, evil-minded men. They truly believed, as he once had, that our cause was righteous. They had simply been wrong.  But try telling that to the millions of people who every year visit Washington to weep at the Vietnam War Memorial.

And what of those men who fought and died, or were seriously maimed in both body and soul? Personally, I think they are heroes on the same scale as that gallant generation of Americans who in World War II helped change the course of the last half of the twentieth century; indeed, perhaps our Vietnam warriors were of an even hardier breed—for they were ordered to wage a war that, almost from the beginning, had only half-­hearted popular support.

Sadder still, returning home they encountered an enemy almost as insidious as any they faced in Vietnam: an apathetic public, hostile demon­strators and a hypocritical government. President Ronald Reagan later would call the war “noble” and extol our effort in Vietnam, even as he covertly reduced the benefits of the men who had fought and been maimed there.

The ancient Greek dramatist Aeschylus wrote, “The reward of suffering is experience.” Robert McNamara, in courageously admitting his own complicity in the tragedy, has bequeathed to us a few immutable and hence invaluable lessons. Never again should young Americans be sent to fight and die in a war that cannot sustain an overwhelming level of popular support, nor be asked to shed blood in support of an inept and corrupt foreign government. (We did that again in Afghanistan, and had little to show for it other than making its president one of the richest men in the entire world.)

McNamara’s stated reasons for not having spoken out much sooner remain open to question. His belief that he owed President Johnson his continued loyalty is a tragic misconception; surely McNamara owed the American people (whom Johnson had repeatedly deceived about the war) a greater allegiance. Further, McNamara’s opinion that his voice of dissent would not have made any difference smacks of intellectual dishonesty.

Yet one thing is sure: he has shown us that every man and woman, be they politicians or private citizens, should have but one true constituency: their own conscience.