—A Long and Joyful Life

From interviews with Margaret Van Every during the spring of 2019 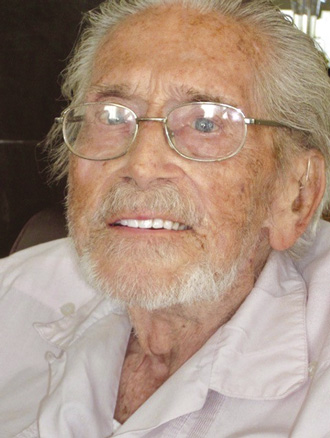 Last February some 20 celebrants gathered to pay tribute to a beloved friend with champagne, fine wines, hors d’oeuvres, and two cakes—one a rich, creamy tiramisu, the other a vegan concoction special ordered for the honoree. Happy Birthday and Las Mañanitas were given equal time, and that is how Ron Napier ushered in his 98th year. The party ended August 23, 2019, joyful until the last, even through the pain. Ron said he was watching the process of his own dying like a curious spectator.

Though disease slowed his frail body, the brain never slacked off. A week before the end, he played his recorders better than ever, recited from heart all sixty lines of Robert Browning’s “Porphyria’s Lover,” and then many more lines from some antique ballad in Erse (Scottish Gaelic). The eve of his final exit, he sent his last emails. From all appearances, he came across as a quiet English gentleman. Only the long, unruly hair belied a gentle rebel. To know Ron was to love him, but few really ever knew this modest man who seldom spoke of himself. He was a curiosity—a brilliant mind with no formal education beyond high school; where music was concerned, a self-taught encyclopedic mind.

Richard Napier and Doris Hills were Londoners who met as teenagers at the beginning of WWI. They were in the RAF and WRAF, had an affair, and Ron was born in February 1921. Under pressure from grandparents, a wedding took place several months later. Ron says his childhood was uneventful except that his grandfather, a publisher in Buenos Aires, retired to London with a gramophone in his stateroom trunk, a new technology that introduced young Ron to the miracle of recorded music.

When Ron was 12 his father enrolled him in George Watson’s College, Edinburgh, the Dad’s own alma mater. There Ron spent the next five years. He was sent off to school with a portable gramophone and a wireless. Through these devices he developed his life-long passion for music. Whenever the curriculumrequired that he buy textbooks, he would send home for the money but spend it on gramophone records.

He completed school in 1938 as WWII was looming. When his conscription call-up came he chose the RAF and was trained in radar, then a technological innovation. In 1942 he was posted on the south eastern coast of what is now Bangladesh in a mobile ground controlled interception unit. Waiting several years for action that never occurred was the only boredom of his life, he observed, relieved only twice by malaria and taking sick leave in Darjeeling. After the second bout of malaria he joined a unit on Ramree Island off the Burma coast. By this time the war in Europe had ended (May 1945), but the Japanese surrendered in September of that year. He was sent to Calcutta for a few months on a desk job, then sailed home on January 1st, 1946.

On return Ron found that his parents were preparing to move to the Canary Islands and were living temporarily in a hotel. They arranged for Ron to stay with friends, a German Jewish businessman and his German wife, an operatic soprano who had been studying with the famous tenor Dino Borgioli. Gerda Nielsen was her professional name. Despite a 14-year age gap, Gerda and Ron “became very fond of each other” and after a while, Gerda left her husband to live elsewhere. Ron and Gerda married in 1947.

Ron’s mother refused to recognize the marriage and mercilessly harassed the newlyweds, motivating them to leave England. Another contributing factor was that rationing in England frustrated Ron’s attempts to start a mail order business in collectors gramophone records. Gerda had relatives in Buenos Aires and Ron was keen to go there because his father had been born there. So one morning he headed for the Argentine consul to enquire about immigration, but that day was a holiday and the consulate was closed. On his way there Ron had passed Canada House and remembered that Gerda had spent some time in Canada with her first husband and had acquired British citizenship. He phoned her and suggested they go to Canada instead of Argentina and she was agreeable.

In July 1948 they sailed for Canada, and Toronto became his home for the next 35 years. Gerda taught singing, and after a few odd jobs Ron was able to open a music store. After five years he sold the store and went to work for BMI Canada, a performing rights organization and music publisher. From ’59-’69 he was head of publishing and thereafter was manager of Concert Music Administration. He started with BMI on his 35th birthday in 1956 and retired in 1984. “Since I so loved music, it was a kind of play for me and it landed me right inside Gerda’s world. It involved meeting composers and musicians of all kinds. I had a double subscription to the symphony and attended music conferences in Canada, the U.S.A., and abroad. I met musicians as diverse as Leopold Stokowski and Igor Stravinsky and got to know Yehudi Menuhin and Diana quite well.”

In 1976 Gerda became ill with what they belatedly discovered was cancer. Ron engaged a caregiver to stay with her while he went to work. As Christmas approached, the caregiver wanted to be with family elsewhere so she arranged for her friend Winnifred McIntosh to take her place. Win and Gerda got along quite well, to the extent that before Gerda died she said to Ron, “You should marry Win when I’m gone. Gerda died after 30 years of marriage and Win and Ron did get married. Ron retired from BMI in 1984 and a few years later the couple moved to Vancouver where Ron started his own music publishing business, the Avondale Press.

Win and Ron were friendly with Michael and Marianne Warren, and visited a few weeks with them in Ajijic. They were seduced by the charm of Mexico and decided to move there themselves. Ron sold the Avondale Press in 2005 and they immigrated shortly afterward. Ron brought with him an unusual collection of mostly Baroque composers of chamber music, which has been the delight of local musicians ever since. The collection features the well-known classics of that era but also lesser known composers—Janitsch, Quantz, Pepusch, Fasch, and others. They bought a house near Ajijic with mountain and lake views, which they enjoyed a few years, then moved closer to Ajijic for convenience. Their means of transportation, which served most of their needs over the cobblestone streets, was an electric golf cart. Win died in 2017 after 40 years of marriage.

“As to diet, I think it’s been proven that meat is not the best source of protein. I haven’t eaten meat for about 50 years. Now that I’ve been vegan for over a year I eschew all animal products, and I feel so much better, both physically and morally, if I can say that. It is reassuring to know that as a vegan I am not personally responsible for the appalling way that animals are bred to be slaughtered in horrible conditions. . . . Then there is the fact that the vast tracts of land used to produce food for animals could be much better employed in growing food for people. As to water, of which I drink little, it has been pointed out that if one eats plenty of fruits and vegetables—which are my main diet, one gets sufficient fluid. I drink tea, too, and relish some wine each day!

“I happen to have lived a long time, which is probably due largely to good genes. I found out recently that my father lived to 85 and my mother 88. Perhaps the most important contributing factor to my longevity is that I was fortunate enough to have led an interesting, satisfying life . . . and can say that my life as I approach 100 continues to be so. I live among interesting people and engage in activities that challenge my intellect. I play my recorders with a Baroque ensemble that rehearses weekly and I find joy in a weekly Scrabble match paired with someone of my own level. I belong to the Freethinkers who get together each month for a lively discussion. For years I have invited music-loving friends to share great music performances on television most Sundays. Engaging with friends in activities that I love goes far in keeping me happy and mentally fit. Continuing to do the things I like to do, I never get bored. Philosophy of life? I’d say, ‘enjoy myself.’”

The Ron Napier Digital Music Library, currently in the works, will make his rare collection of mostly Baroque composers accessible to the entire community. Stay tuned for details.