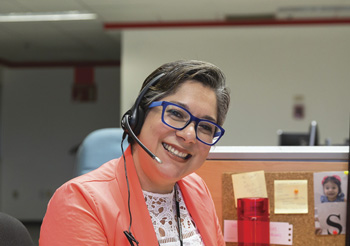 One of the things I’ve always tried to avoid is dealing with customer service in any country. Yesterday, it took two telephones, a computer, and four transfers and over one hour to achieve a deposit into my checking account. This was using their “easy mobile banking app.” No matter how helpful they try to be, there is always some sort of snag. But yesterday, I was only dealing with people who spoke English.

The day before I was working on settling a housing issue for my upcoming trip, a sorely needed vacation. My Spanish should certainly be proficient enough to accomplish a small task. But my Spanish requires a lot of hand gestures, faces, and anything else short of standing on my head in order to make myself understood. But over a telephone, I don’t have those visual aids. Luckily I was able to undergo only two transfers before I found someone who understood my Spanish. She spoke English.

But some customer service in Mexico is a little different. My friend recently had her electric cut off. Her business, like so many includes more than one address. Her total bill surpassed $63,000 pesos. She paid the bill on time, as she has paid all her past bills. But CFE did not record the payment properly. So they cut off the service.

No notice. Just like there was no notice when they were shutting down our service when they replaced some lines recently. Now for most people a day without electricity wouldn’t be much of a problem, but my husband has to be on oxygen the greater part of a day. No electric, no oxygen. Also, no electric, meant no water. With a little notice, and we could have made alternate arrangements. But it has been my experience that CFE finds notifying its customers of their actions is an unnecessary step.

Meanwhile, my friend has now spent her second day at CFE, because even though she is holding both bills and both receipts, CFE needs to find out where they made their error, and she wasn’t getting electricity, no matter what. That was now the third day without electricity, because she had to hire an electrician to find out why there was power outage on the first day. Two days at CFE and the problem is finally solved. She was put on a list, and they promised to try to get the electric on. But it didn’t happen. Day four. And finally, on day five, there was light. Did I mention that this was all over $400 pesos on the separate bill? This doesn’t take into account the money she lost by not being able to run her business, and the time she lost trying to resolve an issue she had nothing to do with. And this is a Mexican woman running a Mexican business, and CFE makes oodles of money on her. I think she’s considering solar now. But with no alternatives, CFE just decides and we all have to put up with their ways of doing things.

In one house we lived in, I happened to run across a Supervisor from CFE looking at our lines. We had problems with power outages and blinking lights. He told me we needed new wires leading to the house.

Since he was the supervisor, he was going to put in the request himself, that afternoon. Oh I was so excited, and so naive. I drove by that house last Tuesday. (We moved eight years ago.) The same old lines were still there and it looked like the power was off.