Some passengers say it is people who take off their shoes on the airplane. Others say it is loud, drunk passengers. Many flyers complain about plus-size people who spill over onto neighboring seats, invading their space. There are those who become enraged at people who take care of personal grooming, like nose-hair trimming or toenail clipping, while in flight. And countless travelers say their primary pet-peeve when flying is talkative, overly-friendly neighbors who ask a hundred personal questions and tell them the unsolicited story of their boring life. But these behaviors can be controlled or corrected.

For me, however, the pain in the planet that is most irritating involves a group of people who cannot control their behavior and cannot help who they are. Their condition is the product of nature, God’s plan. These people, to be fair, are just being themselves, and many people can tolerate them and accept them as they are. But I can’t.

And that is why I say airlines should ban children under five. Or, if their travels are absolutely necessary, they should be stowed in an overhead compartment. After being sedated. It is my opinion that if God had intended for small children to fly, they would have exited the womb on a Boeing-747.

Now don’t get me wrong. I like young children. When they are asleep. Or stuffed in an overhead compartment. Of course, placing children in the spaces intended for carry-ons creates a logistics problem: where would carry-ons go? I suggest they be placed on the child’s parent’s lap. For the entire flight. As punishment for forcing other people to endure behavior considered normal and acceptable on terra firma, but not on flights between Peoria and Pretoria.

Once these pint-size passengers reach five years of age,banning them from air travel seems a bit extreme; they are, after all, more mature at that age. At five, they also would be too large for overhead banishment during emergency travels, like to a taxidermist. But if their behavior warrants it, they wouldn’t be too large for exile to the cargo hold in the bowels of the plane. There, if their sedation wears off and they begin crying, kicking, or chasing one another, their childish behavior would only irritate suitcases and casketed passengers, not living ones trimming nose hair or clipping toe nails.

When they reach their teens, though, young passengers become our equals and no longer should have any seating restrictions. They could sit anywhere in the cabin, provided, of course, they show proof of their bar or bat mitzvah or graduation from the seventh grade, and have letters of recommendation from at least two of the Jonas Brothers or the two Kardashians who know how to write.

I bring this up now because I recently flew from Puerto Vallarta to Guadalajara, a flight that takes between 35 and 50 minutes. This one, however, took an excruciating 54 and a half minutes, during which I endured a four-year-old sitting behind me, continuously kicking my cramped center seat and singing “Baby Shark,” the number one song on the Pre-K Hit Parade since 2017.

A boy, perhaps fifteen, sat next to me on the aisle. Before he sat down, he had stashed a skateboard in the overhead, space that could have housed that four-year-old. The teenager reeked of Axe, Clearasil, and Under Armour labels and began playing with his GameBoy. His presence did not initially irritate me. He wasn’t, after all, kicking my seat or babbling shark nonsense. But when I asked him a few personal questions—OK, perhaps a hundred—and began to tell him the unsolicited story of my exciting life as a retiree, he popped in his earbuds and ignored me. It was then I realized this kid was a rude punk. So, I removed my hand from his upper leg and refrained from interacting with him.

But as the flight neared Guadalajara and the garbage-bag toting flight attendant neared our seats, I had to communicate with him once more. I was polite and non intrusive. Therefore, am baffled why that snotty twerp got all bent out of shape when I asked him to throw away my nose-hair trimmings and toenail clippings. You’d think I’d asked him to help me change my soiled adult diapers.

You know, now that I think about it, five isn’t the right age. Perhaps, all children under sixteen should be banned from airlines, so pleasant passengers like me can enjoy the flight.

Tom Nussbaum has lived in Ajijic since 2015. He is from Seattle where he was a high school special education instructor. He has written several novels and a memoir. 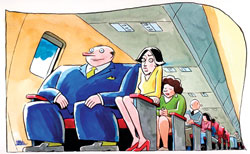 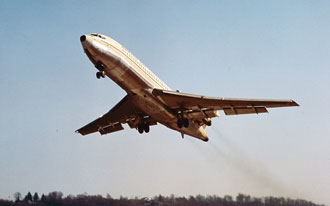 Last Flight Out
Last Flight Out By Christy Wiseman   “Bullshit” my son said when I called and told him the U.S. State Department had sent a note which said