A TOURIST IN RUSSIA
(Part One) 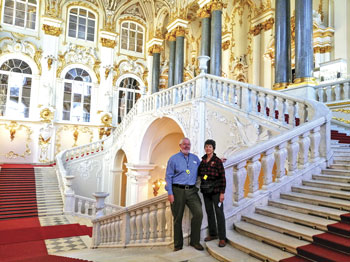 I ask myself how I can sum up my impressions of a month in Russia without sounding like a travelogue. Better to focus on a few special events. One hears again and again that one shouldn’t judge the rest of this vast country by the prosperity of Moscow and Saint Petersburg, but I find the outlying areas are doing well too, and this is confirmed by the locals.

It’s our first week in Moscow and it’s a heat-wave. We are staying in a perfectly equipped B&B in the heart of the city, close to Red Square and a block from the Moscow River; around the corner are East Asian cafes and restaurants open until midnight. We look out on the gleaming, golden cupolas of The Church of Kadashy, an old word for weavers. Traditionally each guild would gift a church to their guild and to the citizens of Moscow.

In our neighborhood is the Church of the Streltsy, the infamous armed guard of Ivan the Terrible. The recently restored one beside us is 14th century, and opposite, another even older, is still being renovated. People drop by at any time to light a candle and say a prayer before the icons. In this thriving, Europeanized city, with some dressed in the height of fashion, and some driving expensive cars on eight to ten lane highways, something else makes it unique—the churches. The frequent sound of bells chiming marks the revival of religion that has re-surfaced like a phoenix from the ashes of destruction of Soviet times.

In Saint Petersburg, nicknamed Petr by the locals, a tour of the Hermitage Museum is an overwhelming experience. Every surface, from floor to towering ceiling, is richly decorated with in-lay, carving, trompe l’oeil and gold leaf. No two are alike of the hundreds of rooms and halls. Skeptics question the opulence of the Russian monarchs, but the millions who visit every year appreciate this past splendor, available for our enjoyment.

Struggling to keep up with our guide, I glance at paintings and sculpture previously seen only in books, a mere fraction on display of the collection of more than a million pieces, the rest in storage. “You would need seven years to see everything, if you spent a minute in front of each art work,” says Olga, a seasoned Hermitage guide. She efficiently steers our little group of nine English speakers, squeezing us through huge parties of picture-taking Chinese tourists. She refers to us as “Dear Guests” and gives a non-stop, three- hour commentary, in spite of having a cough and with no chance of a drink of water. Two incidents recently, a stolen painting and another de-faced, means that security has tightened and our water bottles were confiscated.

We have a ring-side view of the 18th century Golden Peacock Clock commissioned by Catherine the Great from a British jeweler. We are to have a rare unscheduled ‘performance’ as Olga calls it. A group of dignitaries are passing through the hallowed halls, and the clock is to be started especially for them. Encased with the peacock, in a 12x12 glass box, are two golden birds, an owl and cockerel. The reluctant cockerel, needing encouragement from the technician, crows hoarsely, while the owl’s eyes glow as its cage slowly revolves. Then the peacock, star of the show, fans and gently sways its feathers, turning its back on us, better to display their magnificence. The crowd’s hushed silence is broken with “Wows! Oohs! and Aahs!” and Olga beams as though she is personally responsible for this spectacle.

Traveling to St. Petersburg from Moscow on the famous, midnight Red Arrow Express, we are treating ourselves to a first-class coach. Not to be rushed, as is our usual custom, we’re there at 11:30 p.m. with time to spare. Beside each of the sleek, red coaches, a female attendant in a gray uniform is standing stiff as a soldier, to greet the boarding passengers. She carefully looks over our passports and tickets and then informs us, to our horror, that we are a day early.

Frazzled, we dash back to the office, hauling our luggage along the miles of platform we’ve just traversed, hoping to change our tickets. The helpful agent keeps reassuring us that we will make it on time: “Don’t worry, you’ll be okay!” she says, as she gives us a refund and punches in new dates and numbers on a mounting pile of papers. Russian administration believes in providing lots of information and if you fold or write on a form, it could be invalidated.

In trying to keep our tickets in order, we’ve written something on one, but she takes kindly to Alec with his charm and perfect Russian, and we are let off the hook. Hearts pounding, we make it back to our coach with ten minutes to spare, where the severe-faced attendant, still standing at attention, confirms that we can now board. The plump, jolly, ‘main conductor’, who has been parading the platform ready to wave the train out of the station, (trains run on time in Russia) hugs Alec, so delighted is he that we have made it on time. He laughs as Alec asks for a cigarette to calm his nerves. No smoking allowed!

We survey the goodies waiting for us in our compartment: chocolates, bread buns, fruit and bottled water, then head for the restaurant car for a shot of vodka and a midnight snack, where we find out that there are a total of twenty-one passengers on board. Had we not made it, this multi-car, luxury train would have been even emptier.

Ed. Note: Gabrielle Blair was born in South Africa, and made Canada her home during the Apartheid Era. She and her husband, Alec, summer in their Ontario cottage and a remote cabin in Quebec, and winter in Ajijic. Once a professional ballet dancer, she now expresses her creativity by writing poetry and reflecting on the world around her. 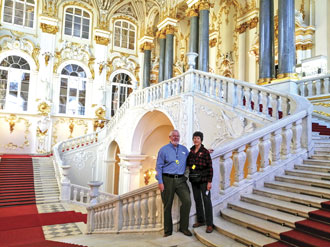 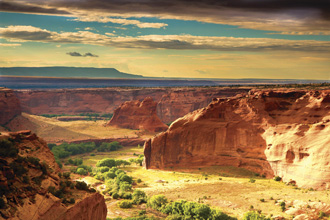