A Review by Henri Loridans
This email address is being protected from spambots. You need JavaScript enabled to view it. 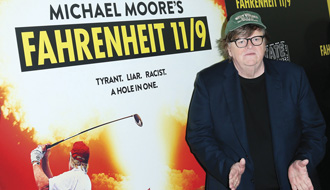 FAHRENHEIT 11/9 is a documentary written, produced, directed and narrated by Michael Moore. Moore began production in May 2017, working with brothers Harvey and Bob Weinstein. He had to start over when Harvey encountered problems with the manner in which he dealt with starlet hopefuls. The film was released at the Toronto International Film Festival in September 2018.

Moore is not known for subtlety and this film is no exception. It is an examination of the Trump presidency with a smorgasbord of related problems including the poisoned water in Flint, Michigan, and gun violence. While Moore remains relatively calm, his presentation throbs with passion. Some critics thought he went a little too far when he had Adolph Hitler lip-sync some of Trump’s diatribes, but it was scary.

Anything could happen if the President’s hardcore, dogmatic base grew to the size of Benito Mussolini’s supporters in the 1920’s and 30’s. Moore has also captured the raw hate of racists and bigots found in that SHINING CITY ON A HILL.

Michigan’s Governor Snyder appears pure evil for his handling of the flint water crisis. There is comic relief when Moore attempts to make a citizen’s arrest, then sprays a truckload of Flint water all over the front lawn of the Governor’s Mansion. For over two hours the film pulsates with interviews of kids calling the National Rifle Association to task, and working men and veterans eloquently and passionately demanding reform from their government.

Michael does not let Democrats off the hook. He puts Obama on the carpet for not taking action in the Flint water crisis and has criticisms of House Speaker Nancy Pelosi. He does give a platform to the new generation of progressives like Alexandria Ocasio-Cortez.

The documentary is not sophisticated. After all, if you gave Michael a preppy haircut and put him in a Brooks Brothers suit he would not be Michael Moore. You do not have to be a Ph.D to understand exactly what he is telling us. The United States does have some major problems and maybe we should be listening to the likes of 29-year-old Representative Ocasio-Cortez and 77 year-old Senator Bernie Sanders.

The documentary was shown in a Mexican movie theater. The presentation was oversold. Chairs were brought in and tickets were refunded. If the film comes back to Chapala, I will see it again. There were no dull moments, and the audience was reluctant to see it end. The film is liberally sprinkled with language that would have had the production banned in the past, but I will take my two teenage daughters and remind them that I still have that bar of Lysol Soap I use to clean potty mouths.