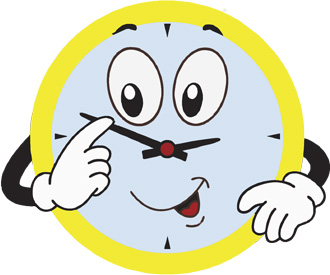 Mexico moves forward to Daylight Savings Time on April 7, 2019. The USA and Canada have already moved forward. This puts us in the twilight zone of time.

When we call friends and family, we have to make sure we take into account that their normal time zone is different now. We have trouble keeping track. Are they an hour more or less than before? Will the business be open or closed now?

The first time that there was a time change in Mexico, I went for a week thinking everything was just fine. Then I found myself standing in line at the bank and laughed at the clock; it was an hour off. Imagine my embarrassment when I found I was off.

Of course that was before we got our satellite service. It was based on Central time, like Mexico, so it wasn’t a problem for a long while. But not too long ago, the service switched to Pacific Time. So while our clock says 11:00, our TV tells us it is 9:00. This is confusing enough, but throw in the fact that my husband has dementia; he gets really confused as to the time. Now when he looks for his favorite program, it’s only an hour behind, and he doesn’t know where that time went.

Daylight Savings time has not always existed. Unlike the stories that credit Ben Franklin for the idea, he actually just wrote a satirical essay on the subject. Two others are credited for the idea. Englishman William Willett wanted more time to play golf, and a New Zealand bug collector, George Hudson, wanted more time to study.

But it was Germany who first started using Daylight Savings in April of 1916. Other European countries also began to make the change. But the USA was slow to change. Farmers and railroads fought against the change. Both complained that the change in schedules would be hard on their work. But stockbrokers and manufacturers were in favor and they eventually won the debate.Woodrow Wilson signed it into law, and on March 31, 1918, it was enacted.

Now, 101 years later, the US Congress is entertaining a bill to cease Daylight Savings time. If it withdraws, will Mexico and Canada also change? And if so, what will happen to all those electronic devices that change automatically? And how will it effect the various professions? And what of interfacing with the European nations? Will they go back to time as it was before World War I?

No matter what, we will continue to be befuddled as to the correct time because of the various time zones around the world. And do not forget the International Dateline. So as made public by the rock band Chicago: “Does anybody know what time it is? Does anybody care? “

Here in Mexico, I’ve tried to change my relationship with time. I dreamed of coming to Mexico, and forgetting about wearing a watch, or writing down appointments. I disliked being a slave to the clock, rushing to get somewhere by the correct time, and living my life around a clock. I wanted to be more spontaneous as I saw the Mexicans. I wanted the people to be more important that a clock. I’d laugh when people would ask if the party would be on Mexican time or USA time.

Slowly I understood. I found that to most of the Mexicans, there is nothing more important that family. And that time was a second priority … except at green lights.