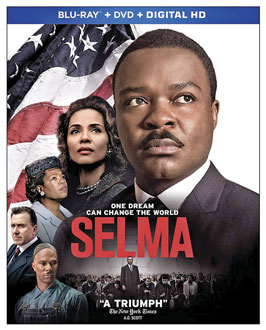 (Ed. Note: This magnificent movie has just been re-released in the United States and some parts of Europe.)

Few people know the history of Ava DuVernay, a black artist who heretofore worked with short subject material. For this film, DuVernay stepped into the ranks of a first-class director of full length motion pictures with a script which in order to get it on film, she had to co-write with another person. But it was DuVelany’s statement that was heard around the world. Out of it came a re-enactment of a moment in history that touches all of our lives.

During the Civil Rights Marches, black people started out just wanting to vote for that which affected their lives. Even if blacks were living in a Deep South which still harbored foolish prejudices, it was Martin Luther King at that moment who made it begin to become a thing of the past.

DuVernay has pulled off a tricky feat: a movie based on historical events that never feels dull, wordy, or lifeless, that hangs together as a story and not just part of a schoolroom class project. Selma is at once intimate yet grand in scope.

It is a work of art touching only some five years of MLK’s life—the same five years it took his intimate associates to convince him that he had to do the unthinkable, knowing the backlash could wipe him out, as it eventually did, though it was for a totally different reason.

Selma does not go into his assassination, nor his womanizing, or labor on his being a preacher, or even into the forthcoming movement of Rosa Parks, who picked up where King could not go because of his death.

Even if you know what’s coming, Selma hums with suspense and surprise, packed with incidents and overflowing with fascinating characters (townspeople and certainly Carmen Ejogo who plays Coretta King, Martin’s wife). It is a triumph of efficient, emphatic, cinematic storytelling. Much more than that, of course, a drama that started with the Civil Rights marches, and then moved into active integration long overdue in the world.

British actor David Oyelowo takes full advantage of his close physical resemblance to King, but he wisely avoids mere impersonation, delivering a performance that’s as sensitive as it is spellbinding. The task could have been easier for Ava DuVernay if it had been a documentary, but it was filmed as a much needed bio-drama.

Selma did receive two Oscar nominations, one for Best Picture, the second for Best Screenplay, but the heretofore unknown Oyelowo was overlooked, as was Carmen Ejogo (as Coretta King), but they have already won an Oscar as far as I am concerned. 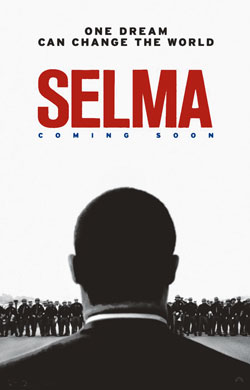