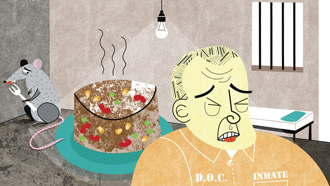 Eddie Pankowski was a member of Delaware’s Public Defender triumverate known as the “ski patrol”: Otlowski, Radulski, and Pankowski.  He had the dubious distinction of being assigned to represent James Allen Red Dog. Red Dog was a thirty-nine year old Lakota Sioux Indian who had previously been convicted of rape and had committed four murders: one in Montana, two in Los Angeles and later, another in the federal prison at Marion, Illinois.
The six-foot-five, 240 pound criminal warrior was eventually placed in the federal witness protection program, however, because he had given federal prosecutors valuable information in many other serious cases.  As is too often the case, Red Dog committed his fifth murder while in witness protection in Delaware. After nearly decapitating his victim with a knife, he proceeded to rape the sole female witness. Following Red Dog’s arrest, Pankowski (known to the legal community as “Eddie P.”) came to his defense.
Red Dog was a cold-blooded killer, for certain, and he was quickly convicted and thereafter sentenced to death in spite of Pankowski’s attempts at a spirited defense.  No amount of mitigating factors presented to a reasonable jury would have avoided what was an inevitable result.
It was March 3, 1993 and rain fell steadily outside the Delaware Correctional Center in Smyrna, Delaware.  Midnight was the time set for execution; always midnight. Red Dog, who had waived any appeal of his conviction and death sentence, had ordered his last meal: shrimp, crabs, and lobster from Baily’s, a local restaurant on Route 13, near the prison. The meal had been delivered on a 3’x 2’ tray and was enough seafood for a family of six.  In keeping with death penalty protocol, a tribal medicine man from Montana was permitted to enter the prison that dreary night to administer the last tribal rites.
Pankowski, a non-smoker, sat in a cell with his client and joined in smoking the peace pipe in an effort to ease his client’s focus on the ultimate consequences. Finally, the Sioux’s last meal was delivered to his cell.
As Red Dog began stuffing down the seafood delicacies, his lawyer picked up a fork and joined in….only to help his client, of course.  But when Eddie P. reached in for one of the lobster tails, Red Dog stabbed his hand with a plastic fork, mouthing menacingly, “Eddie, I’m a rapist, a five-time killer, and a Sioux without a soul.  If you pick up another piece of my final meal, I will tear your heart out with my bare hands.”  Pankowski, hurting from the stab to his hand, slid his own fork back on the tray, smiling nervously at his client’s threat. There was little doubt that the killer would make good on his threat. All of his other threats had been carried out without any hesitation or remorse whatsoever.
When the last meal had been consumed, he was led to the execution chamber, an area about ten by twelve feet. There was a window separating the chamber from the witnesses required to attend. A curtain closed off the chamber from the witnesses until the warden declared that the drugs should be injected. The opening of the curtain gave those in attendance notice that the killer’s death was imminent.  Red Dog’s final words, as he was led before the witnesses to his lethal injection:  “I want to thank my wife, Bonnie, and my lawyer, Ed, but the rest of you can kiss my ass.”
Drugs forged through the Sioux’s body quickly and he was declared dead in less time than many of his victims had suffered in his vicious, bloody wake. Fortunately, as it turned out, in spite of Pankowski’s feeble effort to join in the last meal, there was only one execution that night! Pankowski had been spared.
“The compensation for a death sentence is knowledge of the exact hour when one is to die. A great luxury, but one that is well earned.”
—Vladimir Nabokov, Invitation to a Beheading. (1934)