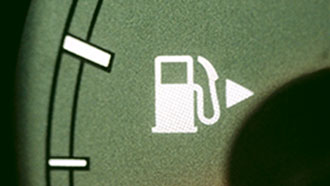 I remember the gas shortages in the United States in the 1970’s. It wasn’t anything like the day Ajijic went dry. My friend and I were going on what we thought would be a quick trip. It took one hour and 20 minutes to drive from Riberas to Bougainvillea’s Plaza. And we weren’t looking for gas. The traffic was jammed in every direction. My friend actually exited the car and went into a restaurant, ordered an ice tea to go, and returned to the car that had only progressed one car length. Eventually, the traffic unblocked. On our way back east, transito had diverted traffic onto the side road, and there was two-way traffic. I think that’s when I used up most of the gas I had left in my tank.

People approached these problems in so many different ways. Those walking were travelling at a faster pace, and relaying information to those of us stuck in traffic. We thought maybe there was a traffic accident ahead. But that’s when my friend and I first heard of the gas shortages. We were in for a long couple of weeks.

My friend wasn’t inconvenienced too much, because she usually takes the bus. Yet, people changed their life style, parked their cars, and started using the bus, so the buses were full and stopping at almost every stop.

Whenever I went out, which wasn’t often, I had a route that would take me by four of the seven gas stations within Lakeside. Someone started a link on Chapala.com where we could report where there was gas. That was helpful. Facebook postings popped saying “I got gas!” People were acting like they’d just won the lottery!

I sat in one line for 45 minutes. I was within one block of service, when people started walking along side telling us they were closing because they were all out of gas. They still had diesel.

With lines that were blocks long people would wait for hours. Most of foreigners seemed perturbed. The Mexicans seemed to take it in stride. I asked one of my best Mexican friends how she was handling it in Guadalajara. She runs two businesses and has two children, ages 2 and 1. She said, “I love it! I had to wait in line for two hours and it’s the only time I had time for myself in ages!” Other Mexicans knew an opportunity when they saw it. I saw a taco bike going along the lines selling tacos and cold drinks. In the line I was in, people in cars, would get out and do a little shopping, and get back in and move their car when the line would move.

Now back in the 70’s. My Dad told me never to let my tank go below half a tank. It’s been my practice since then. But my car has a broken gas gauge. It either indicates full or empty, when neither is the case.

So I drove, never knowing when the moment would come that I be out of gas. That moment came after giving a ride home to a friend of ours. I was in an unfamiliar neighborhood, and turned and found myself in a gas line. I told my husband I was riding this out, because I had no idea how much gas I had. I settled in, had a book. I shut off the car, and waited. The line moved a bit, I started the car, and worked my way across the street. And that was the moment the car went dead. No gas. I tried, and tried, but couldn’t get it started. There were four transitos working the intersection. And before I knew it, one reached in, put my car into neutral, and the other three pushed the car. I thought we would be going out of the line of traffic, but they pushed me straight to the pump, and told them to fill it. The line at that time was about 8 blocks long.

I turned to my husband and said, “I feel like I won the lottery!”