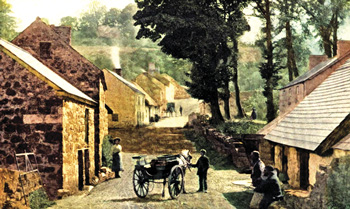 When I was a boy of some nine or ten years, I had the good fortune to reside in a small Irish village called Ballykelly. It was a hamlet of three hundred people and included two churches, a primary school, and a small shop that mostly sold three-day old newspapers and fruit that had seen better days. For occasional visitors, the shop also stocked two picture postcards of the place, one of which was inscribed “Ballykelly Main Street looking North” and the other “Ballykelly Main Street looking South.” This summed things up rather nicely.

At the time, the school was the center of my own universe. It was a modest affair of three classrooms, each occupied by pupils according to their ages. Children embarked on the long road to knowledge at the age of four in the infant classroom and progressed through the other two until, upon reaching the exit door at around twelve years, one was presumed ready to go on to places of higher learning or, alternatively, to a life doing something more useful like sweeping the roads. There was an unofficial cut-off age of fourteen for those slower on the academic uptake and likely destined for the latter career. We were therefore something of a motley crew.

The show was run by a headmaster called Master Stewart, a bald-headed man with an aquiline nose that could have done duty as the beak of a golden eagle, and a ferocious temper initiated by an extremely short fuse. It would have been difficult to imagine a man less suited to be in charge of seventy-odd impressionable children.

In those days, academic standards in Ireland were extremely high, likely a consequence of their origins in both the Catholic and Protestant Churches, neither of which was viewed as being particularly accommodating for flexibility in matters related to learning. These standards were rigorously applied to the 3R oriented curriculum (Reading, ‘Riting and ‘Rithmatic being at the core of everything) and enforced with varieties of physical discipline that, today, would be viewed as next best thing to barbarism. The cane, strap and slipper, often applied to one’s rear, were considered to be essential to the acquisition of academic excellence and I later reflected that this may well have been the origin of the term “seat of learning.”

One day, the humdrum of daily existence was shattered when, in the hours just before dusk, three boys were interrupted in the process of breaking into the village shop. In this they were unfortunate in encountering the shopkeeper himself who, at variance with his normal practice of going home for his tea, had lingered to take stock of the day’s takings and update his inventory. In a small village the identities of the burglars were as readily available as information on the weather, and the next morning the local policeman marched the three unfortunates up to the schoolhouse. Back then, minor crimes involving young people seldom troubled the county judiciary as they were dealt with quite summarily by local residents, and often within the semi-official jurisdiction of the school.

In any well-run judicial system, the severity of punishment is adjusted to match the level of the crime. In this, our school was no exception. Failure to produce homework at the appointed hour merited a single stroke of the cane. Cheeking the teacher earned you three. For most serious crimes, the sanction was the proverbial “six of the best.” I had often wondered why this was “of the best” when clearly “of the worst” would be much closer to the mark. In later years I came to ponder as to whether this use of an antonym was the genus of the political practice of covering up the truth with an obvious opposite. But I digress. This was clearly a situation demanding of six.

The first two boys endured their ordeal with a decent level of stoicism and only a modest amount of blubbering. The third boy, however, was made of far sterner stuff.

“Come here to receive your punishment,” shouted the Master, red faced from the exertion of administering the two previous floggings.

“No,” replied the boy. It was the only word he uttered throughout the whole affair.

The Master and the shopkeeper, two grown men, then attempted to drag the wiry, fourteen-year-old potential road-sweeper into the headmaster’s study where justice awaited. This proved more difficult than one would normally have supposed. In the course of the melee that ensued, the headmaster’s cane broke and the shopkeeper received an elbow to the head which he later characterized as having “loosened five teeth and blackened my left eye.” After a while it became clear there would be no outright winner in this contest.

“Tell him!” shouted the Master to the merchant in an attempt to break the stalemate and regain the initiative. “Tell him you saw him at the stealing. Tell him you’re sure of it.”

“I did,” came the trenchant reply. “I saw him for sure. It was him that was the one hiding his face with the sunglasses!”

An icy silence descended. It did not last long and was broken by the Master. “Sunglasses!” he roared. “Sunglasses is it? You say them’s the boys taking half rotten apples from your stinking shop and you think they have the money to buy sunglasses?” His famously short-triggered temper, a thing best viewed from a safe distance, was now on its way to full-open throttle.  “And, if they did they would never dare bring such frippery into this school of mine! You’re a goat, sir. A goat!”

In Ireland this was a serious insult. It derided the intellectual capacity of its recipient in combination with clever allusion to a classic biblical story. Before this withering scorn, the shopkeeper’s credibility wilted like one of his lettuce. It lay in tatters for all to see.

So, with that, the trial was over. There was no more talk of culpability. The headmaster retrieved a new cane from his seemingly limitless supply; the shopkeeper retreated to his recently maligned establishment; the boy, unpunished, returned to his classroom. No apologies were offered or accepted. That is the way it was in those days.

At the close of a regular school day it was our practice, like the ploughman in Grey’s Elegy, to “homeward wend our weary way.” This, however, was no ordinary day. I ran to catch up with the hero of the hour.

“Did you do it?”I asked, referring to the burglary.

“No,” he replied. I think this was his favorite word.

“You must have been scared in the fight,” I offered.

“No,” he said. “Sure it’s easy to stick up for yourself when you know you’re in the right.”

Having firmly established himself on the moral high ground, he paused, carefully removed a pair of battered sunglasses from an inside pocket of his jacket, placed them squarely on the bridge of his nose, and strode off purposefully towards the setting sun.

Ed. Note: Seamus O’Hagan is a native of Ireland and a longtime Ajijic resident.