By John Ward, himself a fiction
This email address is being protected from spambots. You need JavaScript enabled to view it. 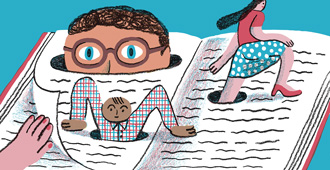 Fiction. Life is a fiction. Not even a well-written fiction. Who authored this drivel? Some say God. Some say Nature. Still others say the Thetans that sprang from L. Ron’s dementia and greed. I’d like to know the truth but the likelihood of truly discovering the truth is from infinitesimally, nano-minimally small to “Oh PUH-LESE!”

Some fiction is better than fact, in fact, much better. Ever seen the movie “A Walk In The Clouds?” I put quotation marks because my modern version of an Underwood does not have Italics, forgive me God and Alejandro Grattan!

Fiction is anything you want it to be. Exciting, thrilling, fair, balanced, loving, sweet, decent, fulfilling, actualizing, impressive, magnificent, awe inspiring... I want more of that, not bloody reality.

So I am thinking of writing a serial. Something fictional that has to be updated every month. OK let’s begin.

I had just sat down in my seat when I saw the Conductor slip something shiny into his pocket. Immediately he turned on his heel and strode towards the back of the carriage, passing closely by my aisle seat. He was about five foot seven inches tall, with a stocky build and a face you would think twice about insulting. His one salient feature was a handlebar mustache. It seemed anachronistic somehow, enough to stay in my memory. I couldn’t see the man he’d been talking with clearly, but I noticed a brown fedora and a camel-colored overcoat.

“You’re just bored” I told myself. “Your imagination is playing tricks again.”

As the train approached the second to last station, Wheeling Downs, the man in the fedora stood and started to pull a clutch bag from the overhead baggage store. A child whined somewhere in the carriage and the train derailed.

In the screeching clatter and the smoke and confusion. In the screaming of women in shock and the clanging of pneumatic hammers and wrenching Jaws of Life, I awoke. I thought I had been dreaming. I hoped I’d been dreaming but I hadn’t. It was real, all around me. The smoke was acrid from burning nylon covered seats. For a moment I did not recognize this hideous Hellscape, but then the memories came painfully flooding in.

I remember the world keeling over, as if reality had been usurped by a universe in which the laws of physics don’t apply. I remember people and hand luggage interchanging freely in mid-air, the constant sound of metal screeching upon metal, but not much else after that.

I raised my hand slowly to my head. That was still there, thank God, even if a bit wet and slippery. Incongruously, I thought of a child I’d seen on the platform, holding a yellow balloon. I remember thinking: “if that thing pops when the train slides in, this kid is going to jump out of his skin.”

“Helloooo!” I shouted as loudly as my painful ribs would allow. “Can anyone hear me?”

No one answered, but there were shouts and seemed to be hundreds of people actively trying to extricate passengers from the metallic tangle. I took a quick inventory of myself. I wasn’t pinned, so I tried moving limbs and body parts one by one. My feet seemed to work. “That’s good I thought.” One by one, legs, hips, hands, arms, all reasonably unscathed, would my luck hold?

Then came the head and thorax. I started to feel the throbbing during my self-exam. The slippery liquid on my head should have told me. My ribs felt broken, it felt like every single one was shattered, but I knew this would not be the case; that they just felt shattered. Raising my working right arm to my head was the shocker. I felt a deep, open gash, like a ravine in my head.

Oddly, although copious, there was less blood than that sort of wound would normally produce, but I could feel my skull, which, thank God, was intact and seemingly unscathed. I pushed the flap of skin and hair up and tried to hold it against my exposed skull.

I knew that, soon, I’d be incapacitated by shock and wished I had some Gatorade or some drink with electrolytes to slam down. I knew I’d need help soon, I was already thinking of getting up and heading into my scheduled interview if I could just walk the rest of the way to Billington Quay. I know now that would be idiotic, but it seemed quite feasible at the time and a good way to ignore the accident.

“Are you alright? Hey, are you alright?” I looked up and there was a man in a fireman’s helmet asking the most stupid question I’d ever heard.

“Never better, except for my body” I answered as dryly as I could.

STRANGER THAN FICTION - May 2009
STRANGER  THAN  FICTION Courtesy of Michael Warren   Starting in 1941, an increasing number of British Airmen found themselves as the