No room at the Inn 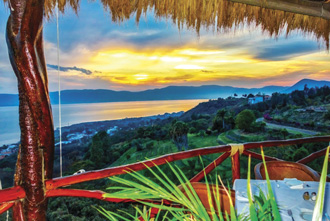 A Face Book meme has a billboard photo of the Grinch that says, “Don’t move to Ajijic—We’re Full.” Dale Palfrey also referenced this graphic in a story in a recent Guadalajara Reporter.

This resonates with me. Each time I hear of a new development, I think “Oh no!” Maybe I’m selfish and I don’t want to share my “paradise” with anyone else. But I’m a very practical person. There really isn’t any more room. Well over a decade ago, we moved here. There was no Wal*Mart. There was no Central Laguna Mall; El Dorado had just finished its first model home. There was traffic, but rarely traffic jams. And I have friends here who talk of when they first came; there was one telephone in the square to use to make long distance calls.

In my former neighborhood, a vecino told me he had spent his entire life living in a four-block radius. Those four blocks held everything he needed.

Sure, developments bring jobs, and tax dollars. But it also taxes an already overburdened infrastructure. CFE, Telmex, Telcel, etc. often have service outages. The villages are struggling to make ends meet. The sidewalks are falling apart; the roads are clogged with traffic year ‘round, while the roads themselves are crumbling.

Trying to cross from east to west takes more time than ever before. Yet most of these problems can be fixed. But what happens when we lose our beautiful mountain views as developers carve into and build large housing developments? And are they safe? A few years after we moved here, mud slides and houses cascaded down the mountain around San Juan Cosala. There was much damage to communities that could ill afford to handle the catastrophe.

At the same time, there is so much to offer here, but are we seeing that we offer help and see to the needs of the Mexicans whose land this is? This is their land, their country, and their culture. Is it the right thing to do to build a large housing development that will appeal to more affluent foreigners while barrios like Tepehua are filled with Mexican’s struggling to survive in homes with dirt floors, and look out spaces in walls that don’t contain windows? Schools go without necessary supplies, and many of the Mexican’s won’t go to a doctor when necessary, even though they may qualify for IMSS or Seguro Popular. Extra medicine and surgeries cost money they don’t have.

Many foreigners volunteer their time and their money to try to make up for the disparities. The projects for Tepehua are growing and helping, yet many Mexicans remain unaware despite an excellent effort. There are charities that help with education, and catastrophic medical situations and most foreigners really do try to help. But does all the new housing have to be in gated developments? Can’t older properties be modernized, refurbished, or can’t vacant lots in neighborhoods be sold to meet housing needs of newcomers? I do not wish to post a “keep out” sign, but I also don’t wish to lose the beauty and the nature that made me fall in love with Lakeside.

Do I have a solution? No. I see meetings being called, and hear about permits being issued. Rumors circulate about legalities of some of the proposed changes. I’m no expert. Yet most of my Mexican friends are not in favor of losing more of their countryside for housing, even if that housing is also for Mexicans.

I wish I had answers, but I don’t. Does anyone?