Green City In The Sun 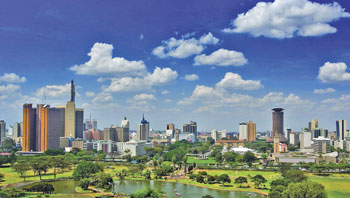 The usual snarl of traffic was today almost belligerent. Drivers blasted horns, shouted profanities, and gestured rudely from open windows as the logjam of cars snaked its way through the verdant neighborhoods overrun with pedestrians.

Max checked his watch, his frustration mounting. Ten days earlier, his brother, Willie, had been Medevacked to Kenya, having been found unconscious in his Lake Victoria villa. The doctors believed the intestinal knotting he had suffered would prove fatal. Max had immediately rushed to his side, hoping he would regain consciousness at least long enough to say goodbye.

“This traffic is insane,” Cole grumbled, pressing the brake. Again.

“Well, this is Nairobi,” Max said. “Look, sweetheart, sorry to abandon you, but I think I’d make better time on foot.”

“You go on. I’ll see you inside.” She rolled her eyes. “Eventually.”

When Max crested the hill, through the crowd he saw that the hospital gate, previously open, was now closed, and armed policemen stood guard. Catching the eye of one of the officers, he shouted, “I need to get in.”

The guard adjusted his rifle in a display of authority and shook his head. “Only authorized vehicles,” he shouted back.

Max’s eyes traveled over the hysterical mob and met those of a young man holding a child. “What’s going on?” he hollered.

“Dear God! The hospital’s been bombed?”

“Not the hospital, the U.S. embassy. Bombed this morning.”

Stunned, Max made his way back to the car. “Cole, it’s utter chaos ahead. The U.S. Embassy was bombed this morning. They won’t let us through.”

In search of comprehension, Cole’s mind fought through this staggering report. “Hang on,” she managed to say. “Let’s give it a try.”

At the gate, when the guard ordered her to turn around, she pled, “But I’m UN,” gesturing to the front of her car. He stepped around, saw the instantly recognizable license plate, and motioned for assistance. While two guards held back the mob, he eased the gate open just enough for her to pass through.

Nowhere else to park, she pulled onto the lawn, and they got out and headed inside. Behind them, wailing from the morgue filled the thick air.

The broad hallways were lined with gurneys, two deep, where the wounded lay, some silent, others moaning, clutching injuries. In the ICU the aide Max had hired to sit with Willie was nowhere to be seen, and squeezed into the cubicle were two additional beds occupied by survivors of the explosions. One’s entire head was wrapped in gauze. A breathing tube was threaded through its folds and attached to a machine that soughed rhythmically next to his bed. The other, his chest bound in blood-tinged dressings, strained for air. Tenderly, Cole stroked his brow while a nurse explained that many had suffered injuries when they rushed to windows to see the source of the blast, only to have been blinded as glass shards ripped into faces and skulls when the second explosion went off. She said that the death toll already exceeded two hundred.

Max shook his head in commiseration, then turned toward his brother. “Any change?” he asked. The nurse said no, and added that a priest was in the building, administering last rites.

Without a whisper, Willie died shortly before midnight. Max’s eyes spilled over as he clung to Cole in what seemed utter defeat. When he turned to leave, she hesitated.

Max tended to bureaucratic paperwork and was returning to the ICU when he met Cole. “They’re gone,” she said. “Their loved ones never came.”

“So sorry, sweetheart. What an awful day for us all.”

They spent a sleepless night at the Norfolk Hotel, with Max recounting fond “remember-whens” of his big brother. Then, over breakfast Cole said that although she wanted to stay, she had court the next day, and she hoped he understood. Max said he did, shaking his head yes-no in that way only Indians can, and that he’d come home once the necessary arrangements had been made. In the porte-cochere they shared a lingering embrace, then he watched her drive away.

Cole rode past Uhuru Park, a sparkle in its winter green, then joined the open road. She had just passed Jomo Kenyatta Airport when she pulled off-road beside a bus stop. “Jambo, Sister. Would you like a lift?”

The obsidian-black nun grinned, revealing teeth as flawless as honesty. “And a fine hello to you, child. I’m most grateful.” She placed her valise in the backseat and climbed in. Once settled, she asked, “Are you a Christian, dear?”

The question hung as Cole’s thoughts drifted to the hospital, then to the UN tribunal, in Arusha, Tanzania, a four-hour drive south, where her days were spent in the courtroom, mere feet from men accused of masterminding the 1994 Rwandan genocide that claimed the lives of almost a million, nearly all by machete. Then, her gaze found the fearless equatorial sky and the unparalleled African landscape, gifts of immeasurable proportions.