The Enigma Of Mexico’s Plumed Serpent 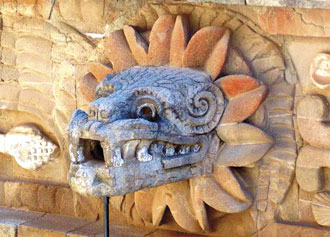 In myth, he was a powerful god-king. In reality, his influence spanned centuries. As a human, he was a kindly priest-ruler. As a deity, he was god of the wind, part bird, part serpent. And in history, his prophesied “return from the east” foreshadowed the fall of the Aztec empire.

In all Mexican mythology, no other single figure attained the prominence of Quetzalcoatl, the plumed serpent deity. Honored throughout Mesoamerica with temples, codices, stelae, narratives and chronicles, this god-king was worshiped by cultures from the ancient Olmecs to the pre-conquest Aztecs. His teachings have been likened to those of both Buddha and Christ.

But why was he such an enduring presence, and was there an historic basis for his many deeds and exploits, as some legends would have us believe? The answers seem to lie shrouded in the very basis of New World mythology, where men and gods are often intermixed and simple tales transform into legends and religious beliefs.

The Quezalcoatl of myth was a composite figure--part deity, part human, part symbol. As god of the wind, he travelled to the sun and brought back the gift of music. He also took the form of an ant to steal corn from the sun god and provide this life-giving food to mankind. He bestowed upon his worshipers the gifts of enlightenment, culture, ethics and laws. In various iterations of the myth, he symbolized wisdom-tolerance culture. And at one point, he was believed to have assumed an incarnate form, ruling his subjects in a highly moral tradition.

Also, according to myth, this deity was betrayed by a rival god, who goaded him into a night of revelry and incest with his sister. Ashamed and repentant, he banished himself to an exiled existence at an isolated spot on the seacoast. Here he built his own funeral pyre and cast himself upon it, heart rising from the ashes to become the planet, Venus. In another version of the myth, he left the coast in a raft of serpents, vowing to return from the east on a specified date.

It is the latter version that gave rise centuries later, to the belief that Hernan Cortes was the god, Quetzalcoatl incarnate once more, since the conquistador’s arrival coincided with the predicted date of the legend. The origins of the myth and surrounding legends are obscure, but probably arose during the Olmec civilization which flourished on the Gulf coast between 1200 and 100 B. C.    Perhaps the earliest and most dramatic evidence of the influence of Quetzalcoatl can be found at Teotihuacan, a powerful religious center and site of the famed pyramids outside Mexico City. This center dominated the central highlands between 400 B.C. and 600 A.D. and it is here that an elaborate temple dedicated to the deity was built by a cult of his followers. (Its remains, including images of the plumed serpent, can be viewed today.)

From here, the cult spread its influence and religious precepts to other cultures of the era. Images of Quetzalcoatl can be seen in ruins of Toltec and Mayan religious centers among others. Many Mayan codices also depict the deity in various iterations and activities.

Several centuries after the collapse of Teotihuacan, the Toltec capital of Tollan had been established. According to ancient records, one of its rulers sent his son, Topiltzin, to study under priests of the religious order of the plumed serpent, an outgrowth of the cult of Teotihuacan. Topiltzin eventually became a high priest and was given the surname of the order, Quetzalcoatl. He later assumed leadership of the Toltecs. At this point, legend and history become confused. There is ample evidence that Topiltzin was indeed a priest-ruler of Toltecs who, upon gaining leadership, moved the capital from Tollan to Tula. This legendary ruler Topiltzin Quetzalcoatl is described in chronicles as a compassionate leader, a great lawgiver and civilizer. He taught his people new agricultural methods as well as the process of refining and working silver, gold and copper. He also banned the practices of human and animal sacrifices, welcomed outsiders who embraced religious beliefs and attempted to put an end to the continual warfare with surrounding territories.

However, many Toltecs were greatly disturbed by this “heresy.” Their traditional religion had required warfare and resulting human sacrifices as a means to appease their blood- thirsty gods. If angered, these deities would surely withhold rains and other blessings required for ample crops. Plots against the leader were hatched among various dissidents and political and religious rebellion ensued. Finally the once-powerful ruler was unseated and forced to flee the capital, taking with him a cadre of his faithful priests of the order of Quetzalcoatl.

They journeyed east to the religious center of Cholula, near the present day city of Puebla, where apparently other practitioners of the cult held sway. Some years later, he travelled to the coastal area of Veracruz, promising to return to the highlands on the date of Ce Atl, which represented a specific point in the calendar.

His travels then took him to the Yucatan where Mayan chronicles indicate that he arrived sometime between 987 and 1000 A. D. Here he was called Kukulcan and is said to have settled in the city of Chichen Itza, another prominent religious center. Did he, as some historians surmise, seek out Mayan followers of his priestly order? Or were the Mayan legends and codices dedicated to the plumed serpent the result of his visit? Surprisingly, many of the images of Quetzalcoatl in Yucatan have been dated back to the same period of Topiltzin’s arrival. Some chronicles indicate that he did indeed return to the highlands, but legends give varying accounts again blending probable historical events with folklore, or adapting one to the other.

The most widespread of the legends of Quetzalcoatl is a primary example of this, and is based on his promise to return from the east on the date, Ce Atl. By fantastic coincidence Spanish conquistador, Cortes, arrived from the east to the shores of Veracruz on approximately the same date some centuries later. Another coincidence was that of the appearance of Cortes. Quetzalcoatl of myth and legend was described as fair skinned, bearded and of taller than average stature. Cortes came very close to matching this description. The rest is well-documented history.

Appalled at the apparent fulfilment of the 500-year-old prophesy, the Aztec ruler, Moctezuma, concluded that it would be futile to fight off a god, so he sent gifts—including gold—to appease the invader. This, of course, only incited the gold-hungry Spaniards to press on to the Aztec capital of Tenochtitlan, which they eventually overthrew in their conquest of the Aztec empire.

But the enigma remains. How much of the legend is myth and how much is history? To what extent did the legend mirror actual events? And to what extent did mythology influence them? Only one thing is certain. If indeed Cortes was the reincarnation of Quetzalcoatl, the plumed serpent’s qualities of kindness and humanity were lost somewhere in the transition.