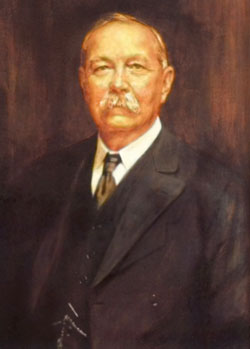 Imagine a character so interesting that when his creator tried to kill him off, waves of dismay came from English-language readers all over the world. This same character would give rise to exclusive clubs in dozens of major cities, organizations whose sole purpose was to keep his memory alive. The British government would even create a museum in his honor, situated at the fictional address of his home in the heart of London. Finally, envision someone so compelling that many books and thousands of articles have been written about him as if he was an actual person.

If you guessed this imposing personage to be Sherlock Holmes, chances are that you’re as huge a devotee of his as I am. I became hooked on the Sherlock Holmes stories as a boy growing up in West Texas—about as far from the dark and enigmatic late 19th century backgrounds of the Sir Arthur Conan Doyle stories as it was possible to get—and I was always especially thrilled by that moment in some of his stories when Holmes would awaken Dr. Watson in the middle of the night to whisper, “Come Watson, the game is afoot.”

The stories started in the late 1800s, when Conan Doyle, a newly-licensed young eye doctor, began to sketch out a story about a “consulting detective,” while he waited for patients that never came. That story, A Study in Scarlet, brought into the fictional world a detective like none other before him. Doyle’s genius was in giving the reader the same clues that were given to Sherlock Holmes—which added to our amazement when he deduced things we “saw but never perceived.” The author sold the copyright to the story (which was as long as a novelette) for a mere 25 pounds, but no matter. Conan Doyle and Sherlock Holmes were off on the ride of a lifetime.

Before that ride came to an end, Doyle had become an immensely successful author (he, George Bernard Shaw and Oscar Wilde, among the most celebrated Irish writers of that entire century), and so famous for his own strong deductive powers that he was sometimes called in by Scotland Yard to help with especially difficult cases. But deductive reasoning aside, there was so much more to the character of Sherlock Holmes (most always written about by his faithful companion, “Doctor Watson”) that often the prologues of the stories, presenting Holmes—the obsessive, cynical man— were as interesting as the crimes he solved.

And what mysteries they were! Often set in exotic locales, with an unforgettable cast of characters and villains that made those in the James Bond stories seem like cardboard cutouts—attributes that would inexorably lead Holmes to the movies.

Eventually, some 180 (!) Sherlock Holmes films were made (the best feature the British actors Basil Rathbone or Jeremy Brett). One entirely original film (written and directed by Nicholas Meyer) had Sigmund Freud help the master detective overcome his addiction to cocaine, as well as resolve some deep-seated psychological problems.

Doyle, in the second half of his life, would turn his formidable intellect to the greatest mystery of all: what happens to us after we die. Never a dilettante, he became world-renowned as an expert in paranormal psychology. He would also, over the course of a long career, write critically-acclaimed novels, among them The White Company and The Refugees.

Yet for me, none had that spell-binding late-night moment in the Holmes stories in which I used to imagine him whispering to me, “Come, young man, the game is afoot.”

(By the way, my belated thanks to all those potential patients of Doctor Doyle’s who never came to see him.)