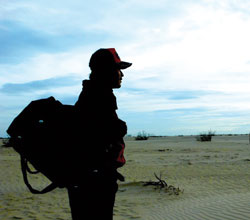 The U.S.-Mexican border is an imaginary line stretching from San Diego to Matamoros. It is 1,933 miles long, and forms the southwest boundaries of California, Arizona, New Mexico, and Texas. Its influence permeates an area two to three hundred miles wide, on both sides of the line.

Traveling from east to west, one becomes aware he is entering the borderland when he reaches Houston. Here, Dixie grits turn into Mexican tortillas; cold beer signs become a cerveza fria; hay isn’t something you feed a horse nor a papa someone you write to for money.

This blending of Mexican-American cultures becomes more pronounced the closer you get to the border. It manifests itself in the language, music, food, dress and philosophy of life. Conversations are fractured, sometimes right in the middle:

Borderland airwaves are rife with local news in Spanish. Radio stations trumpet disc jockey programs targeting Latin hit tunes. Schools have bilingual curriculums and students are taught in English and Spanish. Mexican songs are sung and few are the borderland students who don’t do the Mexican Hat Dance equally as well as they square dance.

Kentucky Fried Chicken and McDonald’s fast food outlets are outnumbered by taco, burrito, and other Mexican food restaurants. Antojitos are frequent bill-of-fare in school cafeterias. Such is the complexity of interlocking cultures and the closer you get to the border, the more obvious it is. Cowboy hats make way for broad brimmed Mexican sombreros. Tight blue jeans are replaced by elaborately embroidered cotton dresses.

People look younger and it has nothing to do with borderland air. Mexico’s birthrate is among the highest in the world, with the average age as low as fourteen. Short dark people dominate the border. The tempo of life becomes slower. Here it is always mañana. Anglo philosophies intermingle with Latino. The Anglo’s compulsion for constant action is subtly sidetracked. The Anglo, vaguely aware that he might die someday, acts as if he doesn’t believe it. The Mexican believes. His acceptance of both life and death often expresses itself in comical credos, e.g., “If drinking interferes with your work, stop working.”

People living a few miles from the border are dubbed “border rats.” The degree of their indoctrination in bi-nationalism, biculturalism, and bilingualism, is intensified by their proximity to the border.

The following are guidelines to determine whether one has become a 100% “border rat.”

When you listen to Mariachis without ear plugs.
Prefer your chili sauce super-scorcher hot.
Whistle “La Cucaracha” in the shower.
Exchange taco recipes while driving alongside another car.
Season beans with lard.
Slick your hair down with butter.
Call your boss “patron.”
Stucco your house and paint it robin-egg blue.
Never do today what you can do manana.
Use beer cans for road markers.
Paint boulders white and drive around them.
Mix all drinks with tequila.
Spend your day off polishing your car and drinking beer.
Name all your dogs Chico, Paco, Taco, Nino, etc.
Find yourself singing the “Star Spangled Banner” and begin with “Jose, can you see . . .?”
“Is it for real?” One asks a 100% border rat. “Will it be like this someday, all the way to Los Angeles?”