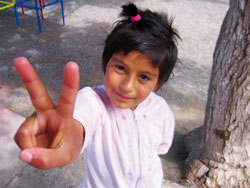 Still in their crisp, white kindergarten uniforms, two young girls are playing out in front of their house, when a certain cowboy, a well-known local character, casually rides up to the girls to give them a better look at his horse.  Beside themselves with excitement but with great trepidation, they tip-toe up to the horse and then touch it, immediately recoiling, shrieking and squealing with an equal mixture of fright and delight…again... and again. I stop and smile.

Same said character was spotted riding his horse halfway into the Chameleon Bar.  Their resident dog, a seemingly hermaphrodite Wiemerainer, wasn’t having it.

A certain Very Fashionable Lady was spotted “chewing her gingham” at a recent gala charity dinner.

A gaggle of handsome teenage boys comes running my way on the cobblestone street, racing like track stars, all the while pelting each other with overripe fruit and laughing, laughing, laughing at the joy of it all.

With explosively cheerful energy, the exuberantly talented drummer boy down the street plays his upside-down paint buckets with cut up broomsticks, using a rickety old metal folding chair for a cymbal, while belting out some tune at the top of his lungs - OK, a tad off-key, but with all the gusto of a drunken cantina singer.  I smile as I pass by, easily picturing him one day soloing with a major banda in an arena in front of 50,000 people.

One day at the tianguis, the open air market, where I buy most of my food for the week, I heard the high-pitched Mexican grito, usually saved for occasions involving tequila  So, I asked the vegetable vendor (with his handsome son who looks like an Aztec sculpture) what was happening.  A fiesta?  Is he drunk?  The vendor told me, no, it’s just alegria - the spirit of good cheer, which is just in the air here - a deep part of the pre-Hispanic culture, a deep tradition of Ajijic, itself…I know it’s not a European thing.

Three little boys are playing in front of their house - one has a little plastic flute from kindergarten and the other two are drumming with scraps of metal found nearby, sounding remarkably pre-Hispanic.  I said to them, “You are little musicians.  If you practice, practice, practice, you can become real musicians.”  Later I’m returning, and two of the little boys are still out there.  I ask them where their instruments are.  One, who was busy eating something, springs up and very animatedly mimics a stand-up bass player, singing “dum, dum, dum…”, while laughing with his mouth full of food, visible between his missing two front teeth…a tad gross, but endearing.

An ancient couple with familiar faces walked past me as I was chatting with someone on the corner of the Plaza. We exchanged “buenas tardes.” Later they passed the church as a wedding party was leaving and the bells were pealing, holding hands - neither one using a cane - smiling and gazing into each other’s eyes as though they were still love-struck teenagers.

At the crowded Christmas Eve Mass, I slip into the very last pew with one space remaining next to me. One of the priests kneels down beside me to say his preparatory prayers. He looks a lot like my ex boyfriend.

A group of participants in the San Andres Fiesta allegorical float procession was sitting around Calle Galeana behind the church waiting for the procession to start. The town banda was warming up a little as the padre came out to bless the floats. A female horn player pulled her cell phone out of her amply filled low-cut blouse to take a call.

And so goes the daily, delightful minutiae of life in Ajijic. 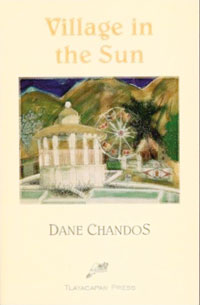 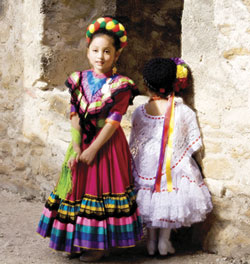 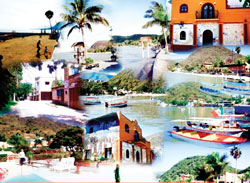