OVERHEARD SOMEWHERE IN THE AFGHANI DESERT

As Told to John Ward 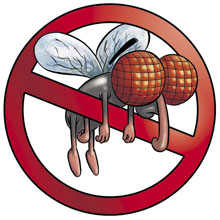 I am a Moscus Domesticus, also known as a household fly, although I prefer the Latin name for reasons of self-esteem. One day, in the early fall of 2008, I was carried aloft into the sky by a mighty wind. I was helpless and soon I was caught in the dreaded Trade Winds.

It was over a remote part of the Afghani desert that I was hurled against the outside of a large tent, which glowed in the evening gloom. Exhausted and battered I knew I had better get inside, as the desert was cold.

As I was cleaning myself I heard two men begin to talk. Then they were joined by a third man who spoke only English. His name was Hamid.

“You should be ashamed, Hamid, that you do not speak the language of your fathers,” said the tall one with the beard.

“You are right as usual, holy one; it’s not easy to learn the language of Allah!

“His name be praised” said the holy one and all three bowed their heads. I noticed that they were eating some sweet and sticky fruit from a bowl. “We are here, my friends, to discuss ways to destroy the Great Satan!”

The holy one was speaking again. He stood to his full height and his head dented the top of the tent, making it look like they were meeting inside an enormous sombrero. “Hamid, you and Ali-Ali bin Ali are my most trusted advisors when it comes to destruction. I want your feedback on some ideas I have to destroy America”—“Death to America” they all screamed in unison. I thought it would sound better in harmony.

“Brothers, I have a plan, based upon a plan that was used in the Second World War!” Their eyes gleamed as they looked up at the holy one. “Not that I read anything but the Holy Quran, but I once read Life Magazine, in a moment of weakness, and it said the Germans found a way to destroy the economies of the allies, by printing millions of their currency, both British Pounds and Dollars of America.” “Death to America!” They shouted in unison. “By printing all this extra currency” he continued “we can flood the market and destroy the economy by making their money worth nothing. What do you think of that plan?!?”

Hamid spoke up: “Holy one, I am afraid that idea is not original!”

“I just said it came from the Germans!”

“Yes, but it’s already being done.”

“What do you mean? Is Hammas doing it? I bet it’s those sneaky Mujahadins!”

“No, no…We don’t have to do anything…The US is printing so much money for the war in Iraq it’s destroying its own economy as we speak. It prints 200 Billion every four or five months!”

“OK, fine!” Barked the holy one, “Bad idea, but I have other ideas! Let us try to make it uncomfortable for the Americans…” “Death to America!” They all shouted in unison.

“We make them hate to travel. We send a message that we will hide explosives even in our holy socks so that they will be harassed at their airports and hate flying! This will slow the economy and.... What? What is that look?!”

Hamid blushed. “Ah… that is already being done, holiness!

“The immigration people make the lives of travelers miserable, searching their baggage, their clothing, even their shoes and socks. Apparently someone tried to get explosives on in his shoes and now everyone must remove their shoes. But, because they are trying to prove to the world that they do not pick on people by race, I’ve seen them harass and bully a lady of about 85 with white hair and a walker while Arabs walked through!”

The holy one thought for a minute, then spoke: “If they let Arabs through, how about if we could get some Al Qaeda operative into the airports with explosives in his underwear? The idiots would make everyone take their underwear off! I would laugh my head off!”

“Well….” Said Hamid “we would have to find someone in Al Qaeda who knows what underwear is and train them how to wear it….”   “True…. Oh, forget it!”

“Esteemed One!” Chimed Ali, “I have it! If we can get the Americans…” “Death to America” “Yes, if we can get them to ignore their Constitution; if we can make them pass laws that take away their civil rights, they could no longer boast that they enjoy freedom in the greatest society….What is that look, Hamid!!!???”

“So!” Said the Eminent One knowingly. “You are saying that they have already gutted their Constitution, eviscerated their civil rights, hindered travel, destroyed their economy… it seems we only need to sit here and they will destroy themselves for us.”

“That is my point, O Limpid One” said Hamid.

“Yes but I worry about one thing. What of all the captured? If they find out that life under the American system….” “Death to America!” “Yes, if they find out that democracy is a good thing, if they are treated with kindness and dignity, they might change their allegiance….They might not hate the West! What then?”

“No need to worry on that account, Magnificent One. The Americans…” “Death to America” “Yes, well, they are treating them so badly that it just increases their hatred for everything Western.”

With that the men stood and embraced. I flew to the bowl, ate my fill and made plans to return home by way of a camel to Karachi and a pet carrier to Berlin. From there I planned to catch a train to Brugge and a Carnival Cruise to Miami. I made it back and have told my tale to John Ward. Yes, it is true, we flies speak, but I know none of you will believe it, so I won’t get in trouble with the Concilio Alto dei Mosci Domestici.