An Open Letter to Donald Trump 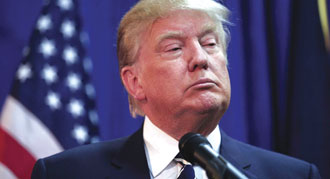 Mr. Trump:  I’d like to give you some input, although, from my own observations, you don’t take to well to suggestions.

First of all, I’d like you to know that there is a big difference between being “politically correct” and manners.  You, sir, have no manners. It is possible to make your point without hurling insults and venom.

Your immigration “policy” is flawed.  It is not clear to me that you understand that immigration to the United States is global. On some level you must see that.  After all, your mother came from Scotland. Two of your three wives are immigrants.  Immigration isn’t just people coming through Mexico to the United States. It isn’t all about keeping “illegals” out. Are you even aware that the net immigration with Mexico is zero, and has been for the last several years? Do you even comprehend that most immigrants to the USA right now are Asians, followed closely by Africans.

Recently while speaking to a Wisconsin group of supporters, you stated that you would make Mexico pay for “the wall” by ceasing cash transfers to Mexico.  Many USA citizens send money to Mexico for a variety of reasons.  Not all cash transfers are from Mexican’s living in the USA.

Recent changes in USA banking rules have made it nearly impossible for expats to deal with their own finances.  Most Mexican banks won’t even take a check from the USA.  Western Union is also cracking down on cash transfers. Do you, Mr. Trump, have any concept on how your brash statements can impact not only the Mexicans, but also American expats who live here in Mexico?

You’ve been bashing the Mexican people, and now they are literally bashing you with piñatas made in your likeness.  As a culture, Mexicans are polite, helpful, very proud of their country, not criminals at all, and don’t want a wall.  Look at the Berlin Wall, built and later torn down. You’ve insulted our Northern neighbors for no reason.  Do you think before you speak or do you just regurgitate “tough talk” to please your audience?  We’re listening Mr. Trump, and we don’t like what we hear. And don’t get me started on your comments on Muslims.  My Congressman is Muslim!  Let’s not repeat past mistakes.

Have you ever sat down to figure out how much Mexico contributes to the USA economy?  “Mexico is a major producer of petroleum and other liquids and is among the largest sources of U.S. oil imports.”  According to the Office of the United States Trade Representatives, “The U.S. goods and services trade deficit with Mexico was $49 billion in 2012.  Mexico is currently our 3rd largest goods trading partner and the U.S. goods trade deficit with Mexico was $54 billion in 2013. According to the International Monetary Fund, as Europe weakens, Mexico will be in the Top Ten in the not-too-distant future.”

Now: does it make sense to alienate your business partners? Mexicans are savvy business people. Do you think they will take your threats lying down?  Absolutely not!  And Mr. Trump, until you’ve lived in Mexico, you will never understand the true meaning of a Mexican standoff.  Believe me, you won’t  win.

Each time the USA changes immigration in a way that Mexico sees as negative, Mexico changes their immigration policies.  Are you aware of how many USA immigrants are in Mexico?  The Washington Post says “anestimated 1 million.”  Oh, and yes, we vote!