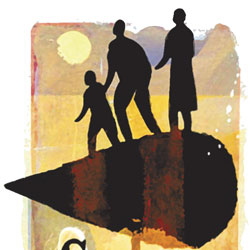 Over the past few years, migration from Mexico to the United States has been drastically reduced. Today, it sits at a net minus. The reasons are many, and include the still-struggling jobs market in the US, and the fact that despite its humane attitude toward immigration, the Obama Administration has deported a very sizable number of undocumented workers, as well as substantially beefed up the security on the border.

There is, however, another trend, this one much more heart-warming. It involves Mexicans who have come back willingly, some after spending many years in the US. We recently spoke with two such Mexicans.

Miguel Roman is a husky, middle-aged man who today is a prominent real estate agent here at Lakeside. Born in Zacatecas, he was only two years old when his parents migrated to the US in search of work. When Miguel was still a child, his parents were killed in an accident and he was left in the care of poor relatives who raised him as best they could. They were migrant workers, and the boy toiled right alongside them in the vineyards in Central California. Later, becoming rebellious, as most teenagers are prone to be, he was in and out of trouble with the law, until finally—with few other paths open to him—he joined the Marine Corps.

For some fifty thousand young Americans, Vietnam was the end of the line; for Miguel, it was the beginning of a new life. Learning to handle heavy equipment in the war, he returned to the United States with a skill and a confidence that would in time earn him a BA degree from Arizona State in Business Administration. Going from one management job to another, he got married, had children and decided he would stay in the US until he had built up a saving account that would support his family anywhere in the world. When that day finally arrived, he checked out Spain and Costa Rica—before coming across an AARP article about Lakeside. Soon thereafter, he had not been here more than a few days before buying a magnificent house (I have seen it!) in La Floresta, and there he has lived happily since then.

Ricardo Carranza was born and bred in Guadalajara, and after graduating with a degree in engineering from the University of Guadalajara went to work for IBM here in Mexico. However, as the market shifted to China, the local work force was cut by three-fourths and Ricardo moved to the United States, eventually ending up in the San Jose area of California, still working for IBM. But as his two children entered their teen years, he began to see that they were missing out on the richness of their Mexican heritage; indeed, his daughter could barely speak Spanish. Moreover the entire family had begun to greatly miss their relatives back in Guadalajara.

So a few years ago, they moved back but by then Ricardo had had enough of big city life, and so rather than resettle in Guadalajara, he brought his family to Lakeside. He still works for IBM, though he had to take a 30% cut in pay. However, he thinks it works out about even, as it costs so much less to live here—even in Ajijic! There is one thing he laments: he says his two children used to have to read much more in schools up in the States—and says that this is something he and his wife will soon resolve in one way or another!

What’s clear is that the magical allure of Lake Chapala affects not only ex-pats, but Mexicans, as well!