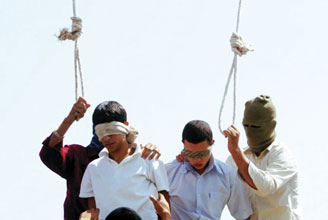 Photo: Faith in Action: Two teenagers, 16 and 18, about to hang in Iran under Sharia law for homosexuality committed when they were 14 and 16.)

“One is absolutely sickened, not by the crimes that the wicked have committed, but by the punishments that the good have inflicted.” –Oscar Wilde

The separation of church and state was one of the great achievements of the European Enlightenment, of which the United States is an offspring. The struggle began in the Middle Ages. The Church had enormous power and landholdings. Popes could force obedience from kings through the power of excommunication. An excommunicated king lost his subjects’ obedience and allegiance.

The Church was on the wrong side in the French Revolution (1789-1799) by being allied with the landholding aristocrats. The Revolution confiscated Church property and sold the lands to pay the public debt. By 1796, Napoleon was in control and he defeated the pope’s army. Napoleon even arrested a couple of popes.

Mexican history also weakened the Church. The Constitution of 1857 took Church property, reduced the Church’s role in public education and the keeping of birth, marriage, and death records. President Venustiano Carranza strengthened the laws against the Church in 1917, leading to the Cristero Rebellion, Mexico’s own religious wars.

The development of the scientific method coincided with Enlightenment political ideas. Discoveries by scientists such as Galileo and Darwin directly challenged Church teachings. James Madison and Thomas Jefferson were instrumental in breaking Anglican political power in Virginia because of Anglican persecution of the Baptists and others, and their power to tax citizens. This was part of Madison’s résumé for separation of church and state when he wrote the Constitution.

It was surely a betrayal of the Enlightenment and the Constitution when “one nation under God” was added to the Pledge of Allegiance and “In God We Trust” became our national motto. There are groups in America that are trying to impose biblical law on the land. “Re-constructionist” Christians, for example, favor a return to biblical law that includes stoning to death.

County Clerk Kim Davis could not distinguish between the legislated marriage laws of the state and the church sacrament of marriage. As far as the state is concerned, marriage is a legal contract that deals with property, children, sickness, taxes, etc. The state has no religious interest in marriage and couples may marry in any church – or in no church at all.

Nothing required Kim Davis to attend or officiate at church wedding ceremonies for same-sex couples. But she must issue marriage licenses in the county office, because that is the business of the state and taxpayers give her $80,000 a year to do the public business.

Furthermore, Kim Davis took a binding oath to support the Constitution, the same constitution that established the Supreme Court with which she now disagrees. Her oath was to execute the office of County Clerk according to law, not according to her religion. She had the option of resigning.

The question of same-sex marriage is now settled law, a right protected by the Constitution. Kim Davis was violating the constitutional rights of others by imposing her peculiar religious belief onto public law. The freedom to swing her fist ends where another citizen’s nose begins. Kim Davis has betrayed the European Enlightenment, the evolution of English common law in America, and the Constitution. Her religious beliefs may rule within the walls of her church. But as soon as she steps away from the church door, the public laws of America reign supreme and she must comply like any other citizen.

The Treaty of Tripoli states that “the United States is in no way a Christian nation.” The Senate passed it unanimously and President John Adams signed it. Kim Davis needs to crawl out of the Dark Ages and progress at least as far as1797 and the Treaty of Tripoli.