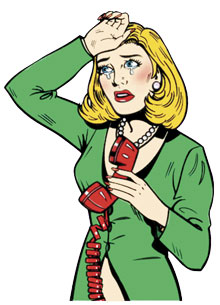 Before moving to Mexico, there were so many things I took for granted in my daily life. I could flip a switch and have a constant current of electricity.  In the years prior to moving to Mexico, I could count the number of electrical outages on one hand. I never experienced a “brown out” until the day after we moved to Mexico. And while I had surge protectors in the good old USA to protect equipment from lightning strikes and resultant spikes in power, I never had to purchase a voltage regulator to protect my equipment from the voltage changes on a daily basis.

Another thing I took for granted was my telephone service. Our telephone service was never interrupted.  Here, our telephone goes out every single time it rains.  When we do finally get the repairman to appear, it isn’t raining, so he tells us there is nothing wrong with the line.  We’d call when it is raining, but, you know, the phone is out!

There is one utility that I never experienced problems with in the States and that was water.  Every single time I turned on my faucet, there was water.  And I never had to wait for the water to get hot.  It came out of the faucet that way, and cold water was actually cold (especially in the winter!)  Here in Chapala, the “cold” water comes out warm and never gets cold.  This is especially true in the summer before rainy season starts.

And then there are times when there is no water at all.  I’ve had to learn all kinds of things about water.  First off, you cannot always count on having water every time you turn on your faucet.  Secondly, you have to be a diagnostician to figure out what the problem is when there is no water.  Is it because the tinaco is empty?  Did the water pump not pump water from the aljibe to the tinaco?  Is there water outside?  Is everyone in the neighborhood out or is it just ours?  Is there a problem with the City?  What is the problem with the City?  How long will it take to fix?  I’m not saying this could NEVER happen NOB, I’m saying it hardly ever happens….and that I never had to give it a second thought!

I never learned that air gets into the water pipes when the water stops being delivered, and that the pipes need to be blown out after the water starts up again.  Of course, I could educate a lot of Mexicans about freezing water pipes in the winter, and the resulting problems, but my point is that I never gave access to water a second thought.

I took it for granted that these things would always be there for me.  I’m embarrassed to say, that even while making arrangements to move to Mexico, I didn’t consider that as a Nation, Mexico has all of these conveniences, but that their infrastructure is so much older and so much more fragile, and that there would be problems with delivering the service.  It never occurred to me that electricity, gas, water would never be there for any reason other than a massive storm, and then it would be restored within minutes or hours, not days.

And I think this is symptomatic of our lives before we came to Mexico.  We were spoiled.  We didn’t always appreciate the wealth of services we had.  We took our utilities for granted. And while we all took turns complaining about paying for these services and infrastructure, did we truly appreciate what we had?

We were living with an “embarrassment of necessities.”