The Particular Value of Pathfinders 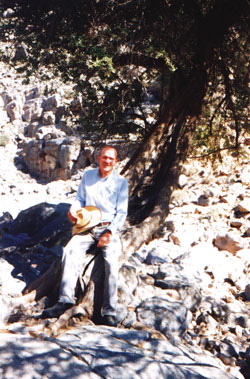 When I was a boy, my imagination would have short-circuited before creating an image of myself as an old man.  I noticed recently that two well-known men I long admired died at the age of 62.  When Edward Abbey (1927-1989) and Carl Sagan (1934-1996) died, I was then young enough to think of them as having predictably fallen among the ranks of the aged.

Now, I am 62 and can appreciate, being in good health myself, how many years more they could have enjoyed and we, we could have enjoyed them in our midst.  Alas, hemorrhaging esophageal vertices fatally weakened Mr. Abbey and blood cancer siphoned life from Dr. Sagan.

Knowing that they died at 62 and that I have reached that age, I feel I am treading the uneven path of life minus two capable guides. Ed Abbey made maps with words and scouted the terrain ahead for us giving due warning of dangerous passages while Carl Sagan, orienting by the stars, replaced fear and ignorance of the night with wonders of the universe. Now I have strode to the point where they left the trail and their absence reminds me of the particular value of pathfinders.

Of course, the ranks of the pathfinders haven’t been totally decimated.  Others still thrive. To be sure, there are men and women younger than myself whom I look up to. But they are younger than me, and however deserving of my admiration, I look to certain men and women who are older than me to run point on the trail. Wisdom and virtue do not always accumulate with aging, but it is to those older than me that I am almost instinctively drawn to know how they deal with the whole panoply of experiences and sensations associated with long life. Seeing how certain remarkable people cope encourages me.

Many years ago one fine afternoon, you could have found me sitting at a table at an outdoor café with a mixed group of university students I was teaching in Eskisehir, Turkey. I don’t recall the gist of our conversation now, but the conversation prompted one of my students to say that she and her peers looked to me, and other teachers I presumed, to show them how to live, how to face life.  I was taken aback. I was simply teaching them English. I had never thought they looked to me for more than acquiring language skills.  Her remark, however, implied more than an appreciation of my ability as a teacher.  It implied that because I was older than them, I had experienced life on the path ahead and could shine a light on stretches they had yet to come to.

Like her, I depend on others for direction. Clearly, however, one need not be famous like Edward Abbey or Carl Sagan to be a guide in life. Ordinary folk serve the role as well. My parents are still living, and long they have broken trail for my siblings and me. What’s more, I cannot overvalue dear friends who, unlike my tiring parents, still bound up the bumpy trail.

When my student said she looked to me for guidance in life, I was frankly dismayed because she had reminded me of my age and a gulf between us due to our ages.  Just the same, I quickly came to see her words complimented me, so instead of feeling resentment, I felt justly reminded of a useful role I have in society, a role to help others on the road of life, a role that we are all born to, and a role that humans have assumed knowingly or not for all the generations.

We rely on our pathfinders, but we too are pathfinders for those coming up the trail behind us.  As we traverse new country with rivers to cross and hiking trails to climb, we share with others what we see ahead.