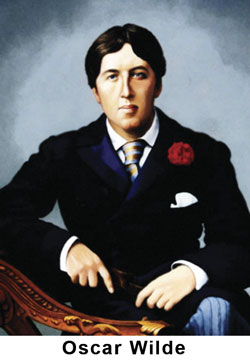 (Wherein we invite our readers to choose the quote that would probably best express their own feelings when “the midnight hour finally chimes.”)

* Chaplin, Charles (1889-1977) When the priest who was attending him at his bed side said “May the Lord have mercy on your soul,” Chaplin is reported to have replied “Why Not? After all, it belongs to Him.”

(Ed. Note: Wilde was dying in a ratty hotel in France when friends from England arrived. Mortified to see him in a hovel that didn’t even have windows, they wheeled him down to a much nicer corner room. When asked what he thought of it, Wilde (flat on his back in bed) peered at the wall next to him, and muttered what would be his last words—a great wit to the very end!)