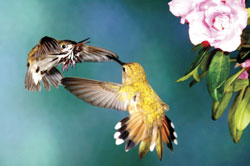 Pre-conquest Mexicans regarded the acrobatic hummingbird with a certain awe. In the Magliabecchiano Codex (dating from the mid-sixteenth century and now in Florence, Italy) an Indian artist depicts the god Quetzalcoatl with a feathered headdress, feeding at a tubular blossom protruding out of the headdress is a hummingbird.

The Aztecs dedicated one of the buildings in their ceremonial center at Tenochtitlán (the forerunner of Mexico City) to the “cut-off hummingbird’s head.” They also believed that the souls of warriors who died in battle, and whose daily task was to transport the sun from the underworld to its mid-day zenith, turned into hummingbirds as they handed over the sun to the Cihuatateo, the souls of women who died in childbirth.

West of the Aztec empire, the Tarascans named their capital city Tzintzuntzán, place of the hummingbird, an onomatopoeic rendering of the sound of their call. More strangely, amulets of stuffed or dried hummingbirds were worn by pre-Colombians in the macabre belief that they would somehow enhance the wearer’s sexual prowess. (Nowadays, in some markets it is still possible to buy the desiccated body of a hummingbird, bound in colored silk threads, as a good luck charm for love.)

Haven’t you ever been amazed by the acrobatic antics of hummingbirds? They are the stunt flyers of the bird world, able to fly not only forwards, but backwards and even, briefly, upside down. (It is the only bird that can fly backwards.) When heard close-up, the rapid flapping of their wings, up to 80 times a second, produces a characteristic humming sound, hence their name.

Though they are the smallest birds known, they lead high pressure lives, with astonishing metabolic rates and relatively huge hearts which have to pound more than 1200 times a minute when the bird is wide awake. To support these extreme expenditures of energy, hummers eat half their own weight in sugar each day. Fortunately, their metabolic rates and body temperatures drop at night, allowing them to sleep without starving to death.

The smallest species of all is the tiny, 5.5 centimeters long, Cuban bee hummingbird, weighing less than three grams.

Individual hummers are often frustratingly difficult to identify. There are more than 320 different species, 50 of them found in Mexico. Females and juveniles generally have less color than adult males of the same species. Most males have brilliantly iridescent display of bright blue, green or red. Despite having many migratory members, hummingbirds are only found in the Americas, and are largely confined to the tropics.

Hummingbirds are such voracious feeders that they are major pollinators, accidentally carrying pollen from one flower to another on their rounds. They can also be fiercely territorial, defending their favorite eating sites against all birds, including other members of the same species. Their long bills reach nectar from even the deepest, least accessible tubular flowers. They prefer red, orange and yellow flowers, but also eat small insects and mites.

Some animals also benefit from hummingbirds. One species, the hummingbird flower mite, takes advantage of hungry hummingbirds to move from one flower to the next. As the hummer greedily consumes nectar, the mite climbs quickly into the bird’s nostril, skipping off again at the next stop!