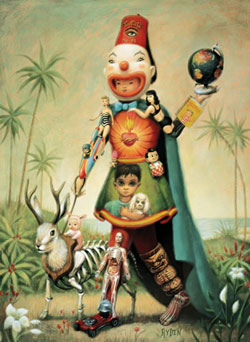 “We can’t leave yet,” Laura insisted. “We ain’t checked even half the tables yet.”

“Honey,” her husband moaned, “this swap meet goes on for miles.” He stopped to rearrange the array of shopping bags, plastic sacks, boxes and packages in his hands, on his arms, hanging from his belt, around his neck and over his shoulders. “We’re gonna have to take a taxi back to the truck as it is.”

“Then what you complainin’ about?” Laura snapped. “You won’t have to carry it all the way back yourself.” If she hadn’t been so laden herself, she’d have stomped her foot for emphasis.

The morning had begun badly, dawn light already showing through the window when she awoke. “Bert, get your butt outta that bed!” she’d yelled, throwing off the covers and leaping from the bed. “We’re late!”

She tossed off her nightgown, dipped into her “lucky shopping housedress,” and headed for the bathroom. She’d worn the old-fashioned, flower-patterned dress to every garage-, yard-, house-sale and swap meet she’d ever been to...and she’d been to every one she’d heard of, nearby...determined that some day it would be lucky. It was the first thing she’d ever purchased at such a sale and the lady she’d bought it from--who said she could see the future--told her it would bring her luck one day.

“Why so early?” Bert grumbled.

“Because today’s Sweetwater Swap-Meet Day,” Laura answered slowly, with exaggerated patience. “We’ve got a hundred-mile drive, dear, so let’s get this show on the road!”

It weren’t just a coincidence, she’d sagely advised Bert, that she’d found the dress only one day after she’d seen her very first Antiques Roadshow on TV. It was a sign. She was sure of it. Some day those TV antique experts would come to their little town and she’d show them her newfound treasures and they’d put her on TV to tell everyone how she discovered all of them. And when they told her how much ever’thing was worth, she’d jump and yell and hollar like all them other fun folks did. You just wait and see if she didn’t.

“Well if this is a damn swap-meet,” Bert argued, “why don’t you swap somethin’ instead a keep’n buyin’ more and more stuff? Swap away somethin’ for a change! We got no room in the house for any more of this junk.” He lowered some of his burden to the ground so he could lift his baseball cap and wipe the sweat from his brow with his forearm. The sun pressed down heavily onto his bare pate. His t-shirt was drenched and his bearded face—she hadn’t let him take the time to shave—was red with the heat.

“I’m here to collect value-bull antiques,” Laura said, trying to be patient, “not give ‘em away.”

Bert let out a sigh of exasperation: “Don’t you think these people know what they got? Don’t you think they watch that damned TV show—” He stopped, suddenly frightened by the intensity of the glare that pierced the space between Laura and him. He’d gone too far. To criticize Antiques Roadshow was blasphemous. She’d told him, warned him. “All right!” he quickly said, moving on. “Let’s get going. Lots of ground to cover.”

It wasn’t until about an hour later that Laura and Bert finally paused, claimed by Bert as a need for a pee-break. Actually, he felt as if all his body-moisture had already evaporated into the furnace-like air. They stopped beneath a tent covering where soft drinks were sold and covered most of the vacant table they’d found with their “antiques.” When Bert returned from the john. He felt like an unloaded pack-mule.

“Okay, now you stay right here, now, hear?” Laura ordered. “I’m goin’ off lookin’ some more and I don’t wanna have to look for you when I come back. So don’t go roamin’ off.”

“I ain’t goin’ nowheres, Honey,” Bert said, waving her off with one hand and reaching for the plastic Coke cup with the other. He mumbled to himself, “I sure as hell ain’t goin’ nowheres.” After a few seconds, he turned to see Laura weaving off through the crowd, looking like a frumpy old lady in a gran’ma dress. He shook his head and shrugged.

“I seen you here before, ain’t I?” a man’s voice asked over his shoulder. He turned to see a middle-aged guy in a plaid shirt, jeans and boots smiling at him. The guy removed his Stetson and sat beside Bert.

“Well, I come here with my wife about one weekend a month,” Bert said, with an inadvertent sneer. “The other weekends we vacation in Hell. Why?”

The guy laughed. “My name’s Carl.” He reached out his to shake Bert’s hand. “I meet lots a guys like you. Wife drags them to all these type a places. Me? I love ‘em. I have to drag my wife to ‘em.” He pointed off to a small table where a pleasant-looking lady about the same age was sitting alone. She glanced in their direction, then looked away. “That’s her. Kinda sour-lookin’, ain’t she? She just sits there all day, won’t carry nothin’ or nothin’.”

Carl’s smile broadened. “I make her. Y’see, I’m sorta, kinda like an addick, y’know? I can’t keep away from these swap-places; always ready, willin’ and able to make a deal. And I was thinkin’....” He studied Bert’s face carefully. “Y’see, you gotta wife who loves these places, and you hate ‘em. And I gotta wife who hates the places, and I love ‘em. I think maybe that we could come to some kind a deal, y’know?”

Bert looked at Carl, stunned, his eyes wide and mouth open. He held his breath for long seconds, then, finally exhaling, asked, “What kinda vehicle you drive?”