The Weird And Wonderful World Of Insects 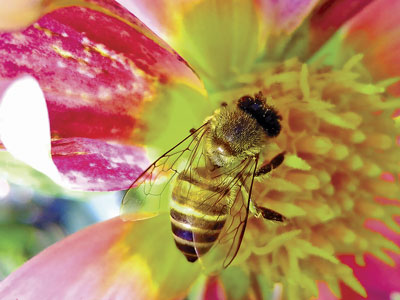 We have all had it happen.  We have been driving down the road on a warm summer day, when suddenly a behemoth of an insect splatters all over the windshield, always leaving behind an ugly yellow gob of insect goo. Later, it will take all of the latest glass cleaners, abrasives and detergents as well as a purgatory of elbow grease to remove the offending bug’s mortal remains.

With regard to man’s relationship to insects, some we love, like honeybees, fireflies, crickets and monarch butterflies. Others we fear, like the tsetse fly that can transmit sleeping sickness as well as the dread Aedes aegypti and Anopheles gamblae mosquitoes that transmit yellow fever and malaria. Most, we just prefer to avoid, like wasps, hornets and the pestilential chiggers.  Some have even been known to chew large holes in winter garments left in storage over summer months. Others, given sufficient time and opportunity, gnaw down entire wooden structures.

They surround us, these strange creatures with multiple eyes and exterior skeletons. In her new book Buzz, Sting, Bite: Why We Need Insects, Norwegian entomologist Anne Sverdrup-Thygeson explains that for each and every human alive on earth today there are 200,000,000 insects, 1,000,000 of them ants. She tells us that they predate man’s estimated 200,000 years on earth. They were here to torment the dinosaurs, the great hairy mammoths and all of man’s primate predecessors.

While the world of insects can be mysterious, amazing, pesky, even dangerous, the theme of Sverdrup-Thygeson’s book is that we humans could not survive without them. Apologies to any entomophobes who may be reading this. We all have our phobias, but each insect occupies a vital niche on the food chain. On the surface it would seem that there are good bugs and bad bugs. Perhaps our perilous experiences with the so-called bad ones is a consequence of humans taking up residence in places best left alone, swamps and wetlands, humid rain forests and seething tenements. Nevertheless, Sverdrup-Thygeson argues, if all insects vanished, humans would not be far behind.

Pollination is vital to the successful growth of food plants that humans could not live without. The first beneficial insect that comes to mind is the lowly honeybee. The labor of honeybees provides us with redder strawberries and tomatoes, juicier melons, cucumbers, apples and berries. Of course, they also provide one of nature’s most commonly known sweeteners, honey, much beloved by humans and bears alike.

While we benefit from the labors of our fuzzy honeybee friends, most know little about them, that, for instance, they can see ultraviolet light. Karl von Frisch in his book Man and the Living World explains the method used by honeybees to communicate with one another. A scout bee sets out in search of nectar and pollen, then flies back to the hive with the results of her journey. The bee communicates the new information by means of a figure eight dance pattern. Her shaking and buzzing tells other bees the distance to her find.  By aligning her body with the direction of the newfound food relative to the position of the sun, the bee signals the way to the location. A round dance communicates to the hive that the food is nearby. A sickle shaped dance alerts the others that the food is more distant.

The list of items that are derived from insects is a lengthy one. For instance, we derive such items as shellac, varnish, paint, jewelry, dyes, tooth fillings, perfume, glue, cosmetics, perfume and insulation from the lowly lac insect which proliferates in southeast Asia. When fruits and vegetables are rinsed in the supermarket, some, like apples, are re-waxed with a substance derived from the lac bug.

The New Testament tells us that St. John the Baptist survived in the wilderness on a diet of locusts and wild honey. Most of us would regard locusts as a repulsive entree. Yet, an estimated quarter of all the humans alive on earth at this moment include insects in their diet. Grasshoppers and locusts can be a much-desired source of protein among a human population deficient in that vital element.

While many insects, like the honeybee and the lac, are beneficial, others routinely perform acts that would make Hannibal Lector blanche. In her Pulitzer Prize winning book Pilgrim at Tinker Creek, Annie Dillard shares her experience of watching a live frog implode into lifelessness as a water bug sucks its entrails out. Most of us have heard of the female praying mantis crunching off her mate’s head while in the middle of copulation. Empathy, it seems is a missing quality in much of the insect world.

Perhaps the most pernicious insect threat to humans is provided by the common house fly. The humble fly cannot consume solid food because they lack teeth. And so, they exist on a strictly liquid diet. When a fly lands on your Big Mac or your morning corn flakes, it dissolves its food with its digestive juices, at the same time regurgitating part of what it has eaten previously, like a road apple or a cow patty, bacteria and all. That house fly is the source of numerous discomforts that plague mankind.

While horse flies are a nuisance to our equine friends, they are less a threat to humans. There is even a Beyonce horsefly, named after Beyonce Knowles. Entomologists studying horse flies decided that their rumps resemble that of the famous singer. No one knows what she thinks of such an honor.

Many insects impress us simply as pests. No one who has ever experienced a mayfly hatch in locations like the Great Lakes can be made to understand how massive such a phenomenon can be. The summer skies are usually darkened for weeks by clouds of mayflies. Streets are covered with them, and vehicles have been known to slide through intersections, causing collisions, because the mayflies have rendered streets and roads so slippery. Anyone who has suffered mayflies down their shirt collar on a hot summer afternoon, may find himself wishing for the death of the entire species. However, the humble mayfly provides songbirds, ducks, geese and fish with a banquet. Then, too, if one examines a mayfly under a magnifying glass, it becomes a thing of beauty.

It is most fitting that Sverup-Thygeson’s book has appeared now, as the return of the Brood X 17-year cicada looms before us. One cannot imagine the life of such a creature, existing underground in darkness for seventeen years before emerging only to reproduce and die. Soon, these strange creatures will emerge from their subterranean existences to rise in clouds and whir their way for weeks on end across the American midlands.

We humans take our insect friends all too often for granted, as we do most of our fellow creatures. And yet, even those we find most obnoxious fill a vital link in the chain of life. Those whom we regard as pests are often eliminated through the use of insecticides. A substance used to eliminate one insect may just as likely kill off others, leading to the current sharp decline in the honeybee population across North America. The culprit is neonicotinoids which affect the immune systems and navigation systems of bees, including honeybees. Neonicotinoids are banned in many countries.

It may be that insects serve as the proverbial canary in the coal mine, much as frogs and other creatures that are most sensitive to disturbances in the biosphere. Neonics are vigorously promoted by agrochemical corporations and are, as a consequence, one of the most widely used insecticides.  Nearly half of the US population has now been exposed to one or more neonic chemicals. They appear in such popular fruits as apples and strawberries. Neonics may affect brain and heart development in human fetuses. In addition, Neonics have been linked to declining songbird populations and to deformities among wild deer. And, of course, they contaminate the water supply. Neonics have been banned by the European Union, but the US Environmental Protection agency has yet to consider a similar ban.

One can take heart that efforts are being made to protect some of our most important insect species. Recently, the Natural Resources Defense Council has filed suit with the US Fish and Wildlife Service insisting that critical habitat be designated for the rusty patched bumble bee, an essential pollinator. Currently, an estimated 87% of the members of that species are gone.

Other threats to insect populations include global warming, light pollution, land use and the introduction of exotic species into environments where they compete with native species.

Few would argue that the elimination of disease bearing bugs is anything less than a boon to humanity. However, since the end of World War II, mankind has been involved in a global chemical experiment with all too little concern for ultimate widespread consequences. Presently, it is estimated that one fourth of the world’s insect population faces extinction.

It could be that a new interpretation of the natural world that surrounds us is overdue, perhaps one that encourages biophilia, a concept originating with Harvard biologist E.O. Wilson that promotes an intimate connection with nature’s creatures, similar to Dr. Albert Schweitzer’s concept of reverence for life. Keeping in mind that whatever affects one species affects all species, whenever we seek to interrupt the food chain, we should do so with humility and sensitivity, in the words of Kierkegaard, “With fear and Trembling and sickness unto death.”