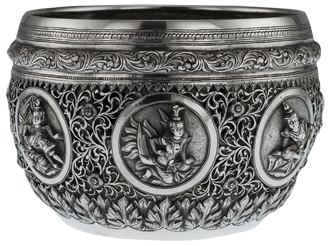 On Karen’s dresser rests a small silver bowl, a trophy won by her grandmother for first place in a golf tournament at a north shore Chicago country club back in 1934. It is engraved with her grandmother’s name, the club’s name, and “First Place - Fall Tournament - 1934.” The silver bowl has been on Karen’s dresser for many years serving as a repository for the day’s detritus: pocket pennies, rubber bands, broken-off buttons, errant paperclips and the like. This morning it is empty. Karen has yet to fall into her new life and its inevitable routine, the source of such items. She moved into her new apartment yesterday.

Her last task after the movers left was to polish the bowl. It glints as the late morning sunlight flashes through the large leaves of the magnolia tree outside her bedroom window. Karen is glad to be back in Eugene where the sweet smells of growing things complements the luster of the newly polished silver.

The lawyer is a strong woman. She is in command, confident, competent, experienced, knowledgeable. She will take care of everything. The lawyer told Karen that, from now on, all contact with him should be through her office. Karen would not have to negotiate. “If he calls, just refer him to me,” the lawyer said. “I’ll take care of everything. What you are doing is the right thing for you.” The lawyer assured Karen that it was all right to think of her own needs. “In this process, you must always think of yourself first.”

That’s what Meg said, too. Meg is the most wonderful friend she ever had. Even though she hadn’t seen or spoken with Meg for some thirty years, when they met up again last Christmas it was like they had never parted. The two of them just fit together. Perfect friends, soul mates. Even after all the years, they completed one another’s sentences, laughed all night. Meg gave Karen unconditional love.

He loved her too, she knew he did, but he thought of himself, he competed with Meg. Meg selflessly gave support, comfort, and most important, affirmation. He wanted her, supported her in order to possess her. In the recesses of Karen’s mind, he was unclean. Meg’s love was untainted and pure, unconditional and selfless.

Despite the comfortable September weather, and despite the fact that she had risen after a good night’s sleep and had showered and washed her hair before meeting the lawyer at 9:30 this morning, and despite it being almost noon now, she felt the need to shower again. She would wash everything away. She would wash away the fierceness of the lawyer too—it was like a meeting with an assassin and was somehow unclean, unclean but necessary.

He said he loved her too. He said he had always admired and been attracted by her athletic figure. He said she was beautiful, but he also said she had boyish good looks. He meant it as a compliment. She wondered if she didn’t have a boyish look about her. Weren’t her hips narrow, her breasts small? Was it true? Is that what Meg sees too? Did Meg think of her as a woman, a man, or both? Did he think of her as a woman and a man? Was she in reality a woman and a man? How do we know these things she wondered?

Meg gave her the confidence to be whomever she was. When he got the letter from the attorney, he would hurt because of the rejection, not for losing her. That happened months ago. That happened morning she left.

They agreed it would be a trial separation. He would stay in Montana to finish his last year of law school and be ready to start a new career. He would have a new life. She had moved back to Oregon. He would come back when he graduated and they’d try to make it work. That was the agreement. But it couldn’t be. Karen needed a new life too, and it couldn’t wait. It was only fair that she take what she needed from life, finally take what she wanted, now that she knew what that was.

She wanted to live alone with nobody tugging at her. She just wanted to be left alone, even by Meg. He’ll just move on in his new life. And Janie. She was twenty-one years old. She was grown up and living in Chicago. Janie would do fine with it. Janie loved him as much as her. Janie was their daughter, neither hers nor his. To Janie, her parents were like gods. Meg told Janie how wonderful her mother was. Meg told Janie that Daddy was a good man. Meg gave Janie suggestions on how to live, how Janie could care for her own soul and be a strong woman. Meg carried a photo of Janie along with a photo of Karen in her wallet.

He told Janie Meg was wacko and a meddler. He just doesn’t understand. Meg is her soul mate. It doesn’t matter that Meg stayed with Ron. Free and beginning a new life, a new uncompromisingly pure and independent life, Karen felt released, as if with just a gentle push, a great iron door formerly locked had swung open letting pure, healing light pour in.

Karen felt the soft, new carpet under her bare feet as she stepped to the linen closet for a fresh towel. She would use a fresh, new, white towel, a thick, soft towel that would comfort her skin after her shower. Opening the linen closet door with her right hand, she reached in with her left hand for the towel. Karen looked at her hand, her slender fingers. Her hand was tan and showed little sign of her fifty-five years. Her gold ring glowed on her tanned skin and against the soft, snowy white field of the towel. The white-gold-tan contrast was sharp, as though seen through polarized lenses; the tan, more tan, the gold more gold, the white more white. She had selected the ring, the heavy, thick, solid, substantial ring, the ring that would endure a lifetime.

She carried the towel to the bed and sat a moment. She opened her hand before her, then placed it like a glove on the field of white that was the towel on her lap. With the fingers spread wide, she examined the back of her left hand. Her open hand revealed small age wrinkles. She inspected the skin. With her right index finger, she lightly drew the skin back to tighten it. The signs of age smoothed away. She held her hand out before her and examined the heavy gold ring. She turned her hand several times for different angles of view.

Karen took the ring between her right thumb and index finger and slowly worked it off. She rose and padded the three short steps to the dresser and, from a height of several inches, dropped the heavy, gold ring into the silver bowl. The bowl rang out a clear, high, enduring tone. As it faded, it seemed not entirely unlike a distant church bell announcing the passing of time. Karen closed her eyes and cocked her head a little to listen as the ring faded. She could have been listening to the song of a distant bird. She wondered for a moment if anyone else could hear it.