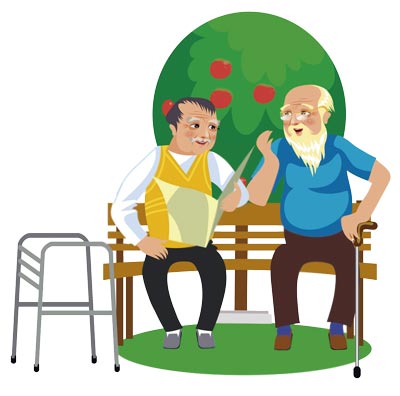 Phillip stopped walking and grumbled to his friend Arthur, “We should’ve climbed up Camelback and jumped off the cliff.” His dry throat made him sound like coarse sandpaper scraping wood. The deep lines on his face made him appear older than his seventy-six years.

They left five marks in the sand, four from their feet and one from the golf club that served as Arthur’s cane. Two hundred feet behind them sat their abandoned golf cart. Ahead the desert stretched further than they could see. Or at least as far as Phillip could see. Arthur could barely see the few saguaro cactuses that seemed to be waving at them, mocking their pact.

Arthur planted the handle of his steel shaft putter in the sand. He hunched over it and leaned on the head with both hands. “We never would’ve made it up to the cliff,” he muttered. “They’d have found us and dragged us back.”

“But at the cliff we could’ve taken a short run and jumped. We’d have been airborne and then it’d all be over.”

Arthur laughed, pointed the club at Phillip and ran his left hand over his few flyaway white hairs sprouting from the top of his head. “Hah. That’s a joke. When’s the last time you ran anywheres?”

“Maybe we should’ve just hired the vet to put us down,” Phillip cracked. “Like he did with old Maxie.” He placed his hand on his friend’s shoulder. “I’m tired.”

Arthur didn’t laugh. “You’re always tired. So am I. That’s why I want to put an end to being tired.”

Arthur and Phillip had been friends for ten years at the Sun City Retirement Home, since they had been forced to share a room, a requirement for social security residents. The director always referred to residents as guests, but Arthur said they should be called inmates.

“How’d we end up like this?” Arthur took out a handkerchief and wiped his milky, dull blue eyes, once as bright as the cloudless sky.

“Well, ... ,” Phillip stretched the sound of the word. “You thought the desert would be a better place than the mountains to end it all.”

Arthur ignored his friend’s comment. “I never expected to live to be this old.”

“You’re younger than me and I’m eighty, Arthur! I don’t know why I decided to join you in ending it all like this. But you’re right about one thing. I doubt if we even have five years left. They won’t be good ones and I sure as hell don’t want to spend my last few years babbling in some nursing home, being fed mush, with “The Price is Right” reruns blaring on the TV. Or bedridden and worried about some middle-aged would-be nurse giving me injections and changing my diapers.”

“Is she good looking?”

“You been watching too many hospital TV shows. When’s the last time you had a woman?”

“You know what I mean. To have someone to hold hands with. Someone to talk to or even dance with. We’re just spending our days sitting around waiting to die. I want to feel like there’s something to live for.”

Phillip continued, smiling. “What about your kids and grandkids? You can talk to them, can’t you?”

“My kids and grandkids got their own lives.”

“You’re a good friend. But being to you is not what I mean. I want to do things.”

“I know. You mean like golf, dancing, or tennis.” Phillip stopped talking and looked at his friend.

“Tennis? I haven’t played in twenty years, ever since my knees gave out. As far as golf is concerned, you can’t even make it to the third tee. And who’d we dance with? Mildred and Ethel? They’re young. I don’t know why they live in the retirement home. They spend their mornings riding around in that damned ATV of theirs and their evenings cackling and answering questions on those TV quiz shows. Sometimes they don’t even come for dinner.”

“Yeah. They go to that Applebee’s restaurant. My daughter took me there once. It’s got a senior special and two-for-one ice cream if you eat before six. The portions are a bit small, though.”

“I like big portions. Then I get take-out bags.

“Mildred and Ethel aren’t that young. I think they’re in their late sixties,” Phillip said. “But they’re active. They go out and do stuff. At least they’re not fat and slow like Ruth and Sally. I think Sally’s got Alzheimer’s. I saw her fall asleep at dinner last week. Lucky she didn’t drop her head right into her mashed potatoes.”

“That would have been a sight. Blue hair in the mashed potatoes.”

“Ethel’s not bad looking. I kind of like her curly white hair. And I saw Mildred smiling at you at dinner the other night. You couldn’t see her with your bad eyes. I think she’s a little wild with her orange-red hair. Makes her stand out.”

“I’m not blind.  Not yet, anyway. The doctor wants to remove my cataracts and put some sort of lenses in my eyes. I told him it’s not worth the effort.”

“Doesn’t matter now. We made our pact. Now we won’t be strapped into goddamned wheelchairs, drugged to semiconsciousness, slack-mouthed, and staring off into space. My brother Bob was ten years older than me and that’s what happened to him when he went to that nursing home in Blythe. That’s where he died. Not for me. We’re going to die the way we want.”

“Right! And here we are,” said Arthur.

“Not working out too well for us, is it, Dr. Freud.” Phillip poked his finger into his friend‘s chest. “What kind of crazy idea was it to steal a golf cart that didn’t have enough gas. And what was the point in coming to the desert, anyway? I forgot.”

“There were lightning storm warnings. I thought it’d all be over in one big zap! Y’know, like those electronic bug killers. That’s why I brought my old putter. I figured I could hold it up and with my hand on your shoulder . . . .”

“You mean you hoped to get us fried in the storm? You didn’t tell me that. But look at the sky. Not a cloud. No storm. And here we are drying up in this heat like the goldfish that jumped out of his bowl.”

“I didn’t know the cart didn’t have enough gas. You’d think the damned owner would have kept it filled!”

“Did you at least bring the cell phone?”

“Why would I? We were supposed to be dead by now. Oh shit. Listen. I hear something coming.”

Phillip looked toward the horizon. “Good thing your hearing aids still work. Looks like one of them desert buggies heading right toward us.”

“Dammit. They’re going to lock us in our room and throw away the key. We’ll have our meals slid under the door like they do in that prison over in Florence.”

The whine of the ATV’s engine increased in volume as it got closer.

Arthur grabbed his friend’s arm. “There’s only one thing we can do. As soon as they get close enough we throw ourselves under their wheels.”

“It’ll work. I know it, Phillip. On the count of three, we jump in front of them.”

They stood there and waited for the cart to get close enough.

Phillip looked at his friend and felt a shudder of terror wash over him. “Is this really the way it ends?” he whispered.

Arthur threw himself facedown in the sand and dragged Phillip with him but the ATV stopped before it reached them.

The driver shouted, “Hold on, you two. What do you think you’re doing?”

“I know that voice.” Phillip rose to his knees, looked at the driver and the passenger, and forgot his death wish. “We run out of gas.”

“Hey,” Arthur exclaimed still facedown. “That sounds like Mildred’s voice! I’d know her screech anywhere.” Using his golf club as a cane, he sat up and squinted at the vehicle.

The two women laughed. Crash helmets covered their hair and most of their weathered faces.

“Mildred, is that you?” Arthur whispered to his friend. “Can’t be.”

“Sure is,” Phillip corrected him.

Mildred slid down from the open vehicle and helped Arthur to his feet. “Me and Ethel used to run search and rescue in the mountains when we were younger. Still do when they need help locating old knuckleheads like you. We been out looking for you. I don’t think the owner of that golf cart has missed it yet. We got some gas and Ethel can take the cart back with Phillip before it’s missed. Arthur, you get in with me and I’ll take you back, too.”

Ethel eyed the two men. “What the hell’re you doing here? You two make some kind of pact to end it all?”

“That’s about the size of it,” said Phillip.

Mildred smiled. “You guys aren’t that old. You got some wear and tear but you still have a few good miles on you. Tell you what.  We’ll let you buy us dinner before we take you back to Sun City.”

“They ought to call it Sunset City,” said Arthur, as he moved slowly toward the stalled golf cart Mildred walked toward.

“How about dinner at Applebee’s?” asked Phillip.

“That’s one of our favorite places,” said Ethel. “They got that senior special.”

Phillips shouted to Arthur. “I guess I’m glad we aren’t dead after all.”

“Of course not,” Mildred scoffed. “You’re still breathing, Now get your ass in here.”

Arthur climbed in beside her as Phillip climbed into the other cart with Ethel.

“And when we get back to the home, we won’t tell them about your silly pact,” Mildred shouted.

“Are you kidding?” Arthur laughed.  “If they found out they’d kill us!”