“The Greatest Generation – and Us” 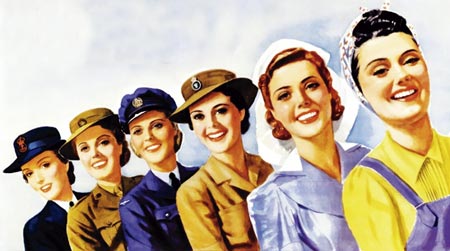 Looking at modern history, one wonders if ours is the generation of wimps. Not only that, a sizable portion of our population has rejected traditional American values in favor of sheer ignorance and self-centered behavior. For example, the rebellion against masks and vaccinations in the name of “my freedoms.” What sophistry to claim refusal to wear a mask or vaccinate equals freedom. It’s a question of people getting sick and dying, not freedom.

It all makes the “Greatest Generation” seem a well-earned epithet by comparison. That was the generation that lived through the desperate hardships of the Great Depression and then saved our liberty from the clutches of fascism in WWII. The Depression and the war meant profound austerity and sacrifice for about fifteen years. First, the long lines at the soup kitchens. And then “Rosy the Riveter” built Liberty ships while the men were fighting the war. Americans devoted great sacrifice to the war effort. The government raised income taxes to 90% on the rich and devised new excise taxes to pay for it. Children bought savings stamps with their pennies and nickels. When they filled their stamp book, they could exchange it for a war bond. The government rationed everything through the imposition of ration stamps. It didn’t matter how much money a person had. Americans could buy nothing without the ration stamps – sugar, coffee, metal goods, and yes—gasoline!

The pandemic has caused inflation due to supply chain interruptions and other factors. Big corporations have exploited increased demand to raise prices above legitimate profit margins. In short, they are making a killing while the people are hurting. Some people are whining about the cost of gas at the pump. Their scapegoat is President Biden. Speculators are buying oil derivatives ahead of anticipated rising prices. Their speculation has raised the price of gasoline to an artificially high level.

And now there’s Ukraine. The psychology of Putin sounds ominously déjà vu of Munich. Hitler wanted the Sudetenland of Czechoslovakia because 3 million German speakers lived there. Although France had a defense treaty with Czechoslovakia and the Soviets agreed to help France and Great Britain against Hitler, they feared war. They gave in to Hitler at the Munich Conference. Prime Minister Neville Chamberlain returned to England to greet cheering crowds happy to avoid armed conflict. Chamberlain told the British public he had achieved “peace with honor.” Winston Churchill was not yet prime minister, but he was critical of Chamberlain. He said, “You were given a choice between war and dishonor. You chose dishonor and you will have war.” Within a year, Hitler invaded and took the rest of Czechoslovakia and then invaded Poland, triggering WWII.

History teaches us egomaniacal dictators interpret everything they get away with as a free pass for their subsequent aggression. If Putin gets away with taking Ukraine, who can doubt he will soon eye Moldova, Estonia, Lithuania, and Latvia. He has called the dissolution of the Soviet Union the greatest disaster in history. He believes fate has sent him on a mission to restore the former Soviet empire.

President Biden and other allies are fearful of directly engaging Russia in Ukraine. Russia is a nuclear power, and Putin might madly use his nuclear weapons in a WWIII scenario. Nuclear weapons today are ten times as destructive as what fell on Hiroshima.

Since we are not diplomatic, intelligence, or military experts, we rely on our leaders’ judgment. An alternate option is making Russia pay an unbearable cost in ways other than direct conflict. That means economic sanctions. Indeed, strong ones are already in place and effectively hurting Russia’s economy. But until now, we had spared Putin’s real chink in the armor. About 40% of Russia’s revenue comes from the sale of gas and oil. The problem is that Western Europe is heavily dependent on Russian supplies. But warm weather is not far away, so Europe would have some time to make arrangements for the following winter. At this writing, the European Union appears to be considering a halt to buying Russian oil and gas.

President Biden has been reluctant because many Americans already falsely blame him for high prices at the pump, which is a political problem. But Biden has proved to be a statesman and a “profile in courage,” not a mere spineless politician. He has done the hard thing and ordered an end to buying Russian gas and oil.

Throughout American history, politics stopped at the water’s edge. America presented a united front in foreign policy, Republican and Democrat alike. No more. Biden’s foes are blaming him for the high price of gas and at the same time urging him to stop buying Russian oil. That will only make prices go up even more, and they will be sure to blame Biden for the very thing they are advocating. That is highly un-American in terms of our tradition.

President Biden should educate Americans about Putin’s danger to the world order. Americans should comprehend that the high cost of gas at the pump is a small price to pay for protecting freedom from further encroachment. We have a moral obligation to Ukraine or any endangered democracy to do what we can. We should not repeat the Munich experiment of appeasement. Cutting off Russia’s oil and natural gas markets, along with sanctions already in place, would wreck the Russian economy. So says Paul Krugman, a Nobel Prize-winning economist. It should stop Putin in his tracks and perhaps even persuade him to abandon his brutal aggression in Ukraine.

The Greatest Generation should be an inspiration to us. Let them be our role model against Putin’s intimidating menace. We can be more heroically American than the whining and petty backbiting we hear today. The Greatest Generation lived with very severe limits on the purchase of gasoline when they had to use ration stamps. We can be patriotic enough to pay more and drive less.

One of the most persuasive influences for others is our example. We have precariously strayed from America’s promise of democracy through voter suppression laws and the attempt to steal elections by substituting electors chosen by state legislatures instead of the voters. Before the colonists landed to form the Massachusetts Bay Colony, John Winthrop delivered a sermon aboard their ship in which he described their undertaking. He said, “We must always consider that we shall be as a city on a hill—the eyes of all people are upon us.” The Greatest Generation is the finest example of that “city on a hill.” We should follow their example and defend democracy abroad and from quislings at home.