[Ed. Note:  This piece was written prior to the Election.  As we go to print, there is still resolution to the election. We expect the results to be certified on December 14.] 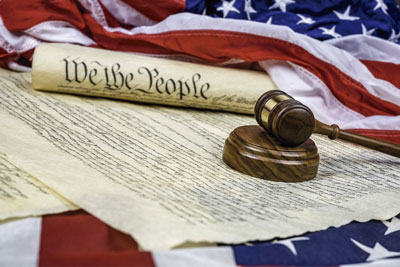 We like to describe America as a democratic country, a beacon of hope for the rest of the world, a “city on the hill.” The description falls well short of the fantasy, however. The Constitution was our official beginning, but it was no more than a “promissory note,” as Martin Luther King put it. Since the Convention of 1787 and ratification in 1789, we have made a lot of progress on that “promissory note,” but we are still well short of being a democracy, in the sense of self-rule by the people.

The Founders blessed us with a Constitution that allows us to amend this covenant with the American people, but we need amendments yet unachieved. Amendments that have advanced the “promissory note” are the 13th, which abolished slavery, and the 14th, which granted Black people citizenship. The 14th Amendment corrected the Supreme Court decision in the Dred Scott case, in which the Court ruled that a slave is not a citizen. Chief Justice Roger Taney wrote the majority opinion of the Court that “black people, free or slave, could never become U.S. citizens and they had no rights which the white man was bound to respect.” That seems hard to believe today, but that’s how it was.

Another significant step forward was the 19th Amendment that granted women the right to vote. The House and Senate passed it in 1919, the year of my mother’s birth. It just barely passed in the Senate. In 1920 it was ratified by the 36th state, Tennessee, making it a part of the Constitution. The Tennessee senate had passed the bill to ratify the amendment, but it was tied in the House and could move no further. But then the mother of a Tennessee representative called him and explained the importance of ratification. He changed his vote. A mother’s appeal provided the single vote needed to ratify the 19th Amendment.

These constitutional amendments advanced American civilization. They make one wonder about Justice Antonin Scalia and his protégé Amy Coney-Barrett. They call themselves “originalists,” meaning they base their opinions on the Founders’ original intent. God help us. Some of the Founders were slave-holders. They counted Black people as three-fifths of a human being for the official census to determine representation. One hopes slavery and women’s inability to own property or to vote is not their idea of “original intent.” That would indeed make them reactionaries of the worst sort.

The Constitution remains flawed in the basic democratic concept that government should be, as Abraham Lincoln put it, “of the people, by the people, for the people.”  The logical conclusion of this concept that the people grant government power is that if the government fails to serve the people, the citizens must overthrow such a failed government. Government leaders are supposed to be servants of the people, not vice versa. Revolution is not only the people’s right, it is their duty to posterity. You will recognize this as the rationale for the American Revolution against King George III.

The electoral college is a glaring flaw in our Constitution. The Founders made concessions to the slave-holding states. They were less populous and more agricultural than the Northern states, where slave-holding was unprofitable. Slave states were allowed to count each slave as three-fifths of a person for representation in the Congress.

The Founders devised a mechanism for the president’s election that did not allow the popular vote to decide. The legislatures of each of the states would choose electors who would elect the president. That’s why millions and millions of people vote in our elections, but only 270 votes elect the president. Most of the states choose electors based on the popular vote of their jurisdiction, but not necessarily. Almost every election cycle sees a few electors violate their pledge and vote for some other candidate than the one to whom they pledged their vote.

Another problem with the electoral college is that it favors the small states, which in today’s terms are generally Republican states. Wyoming, for example, has a small population of 580,000 people. Each state has a slate of electors equal to the number of senators and members of Congress. No matter how small a state is, it has at least one congressman. The result is that the 580,000 people of Wyoming have three electors, with each elector representing 193,333 people. California has 55 electors and a population of 39.5 million. That means that a vote for Trump in Wyoming has four times the effect of a vote for Biden in California. That explains how a president can win the popular vote and still lose, such as Al Gore in 2000 and Hillary Clinton in 2016. This system can hardly be called democratic.

There is no constitutional guarantee of the right to vote. Instead, the states determine the qualifications of voters. A conservative Supreme Court repealed rights that the Voting Rights Act of 1965 had required. And so Southern states have regressed to severe voter suppression. Local officials find ways to disenfranchise zip codes they don’t like. Just ask anybody from Georgia why Stacey Abrams lost and Brian Kemp won the governor’s race. His manipulation of voter rolls. In Texas, local election officials decide whether voter signatures match with their registration. These local officials have no training whatever in signature verification. Many people can’t sign their name the same way twice and are, therefore, disqualified.

Gerrymandering is an undemocratic process by which state legislatures draw their congressional districts so that state officials choose their voters instead of voters choosing their officials.

If Republican-controlled states claim there are too many votes to count before the deadline, the election will go to the House of Representatives, with each state having one vote. Uh-oh. In this case, states like Wyoming and South Dakota get one vote each, and so does California. The states with low populations tend to be Republican, and the states with large populations tend to be Democratic. The Republicans have 26 state delegations, and the Democrats have 23. It does not matter that the Democrats control the House by the size of their caucus because the House has more Republican states, even if they are small states. South Dakota and Wyoming count as much as Texas, California, or New York.

Finally, Trump is already finding excuses to appeal the election to the U.S. Supreme Court, which is no longer a court in the judicial sense but is a political arm of right-wing ideology. The Court has become partisan rather than a court represented by the blindfolded lady holding justice scales. It happened with Bush v. Gore in 2000. Counting votes in Florida was still in progress. The districts of mostly Democratic voters had not completed their count. The conservative U.S. Supreme Court stopped the vote count along party lines and declared Bush the winner before counting Democratic votes.

There are various ways Trump and his Republican puppets can exploit the Constitution to overcome the people’s vote and give Trump a second term by an undemocratic coup. Does the question become at what point will the disenfranchised people of America revolt?

Our Constitution needs additional amendments to come closer to the Enlightenment ideal of human freedom and self-government by the people.