THE ZIMMERMAN COMMUNIQUE
—One of History’s Most Fascinating Moments— 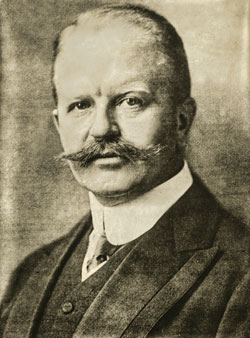 In January of 1917, something occurred that might have forever damaged the relationship between the United States and Mexico. It preceded the United States’ entry into the First World War, a conflict that would go down in history as one of the costliest ever in terms of lost lives.
At this point, Germany’s Kaiser Wilhelm II—the bombastic, choleric leader who had caused the war—was winning it against the Allies (mainly England and France) and the final outcome seemed but a few months away. The United States entry into the war seemed the only way that an Allied victory could be snatched from the jaws of defeat but though repeatedly provoked, the U.S. had managed to remain neutral.
However, Germany’s Foreign Secretary, (Arthur Zimmerman), fearing that the United States might eventually join the war on the side of the Allies, sent a cable to the Mexican government, advising it that if the US of A did enter the war, and if Mexico thereafter declared war on the Unites States, when the war was won, Germany would restore some of the territory (today, comprising much of Texas, Arizona and New Mexico) that Mexico had unjustly lost in the Mexican-American War of 1848. Implicit in the offer was that Germany would also join Mexico in that effort, meaning that the war might be brought to the very south-western doorstep of the United States.
Luckily, the note was intercepted and decoded by British Intelligence* and sent on to its counterpart in the United States. As might be imagined, reaction in the United States to the official note was swift and savage, feelings that were amplified a short time later when Germany admitted (foolishly) that the note was genuine.
That admission helped to further fuel the outrage and generated support for America’s formal declaration of war against Germany which came very shortly thereafter.
Postscript #1: What the initial official American response was to the Mexican government regarding the German proposal can only be imagined but it must have been something like “HEY, FORGET ABOUT IT!” Relations between the two countries would eventually greatly improve, however, during the Second World War men and women of Mexican blood played a substantial part in helping the United States and its allies to win that war.
Postscript #2: Once again in WWII, British Intelligence broke the German code that literally saved tens of thousands of Allied lives. The device that did the trick was called Enigma, which in many respects paved the way to the world of computers that we know today.