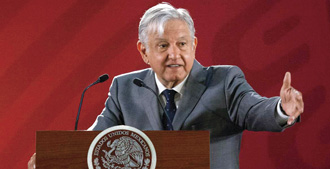 Mexico’s new administration is racing out the gate, pledging to undertake the nation’s “cuarta transformación.” In the process, our new President AMLO is tearing apart Mexico’s bureaucratic labyrinth and political fiber, refocusing efforts toward social development, poverty reduction, and economic opportunity. In three short months, AMLO has made a frontal assault on government graft and its breathtaking corruption. It’s a do-over the scale of which no democratic nation has attempted in the 21st century.

In Clive Cussler’s book Treasure, a would-be dictator (Topiltzin) wants to change Mexico into the old Aztec empire. For the record, AMLO professes no return to ritual human sacrifice. He is, however, in the early days of confronting Mexico’s “mafia of the powerful.” And like the fiction’s Topiltzin, he’s taking no prisoners.

This sweeping change will affect us all.

Much is unclear, including our role as expats. For the almost two million non-Mexican residents, will we be part of Mexico’s watershed transformation?

Last September, I actually got to talk briefly with our new president. Now, lots of people get to approach our new president. He has shed his security detail, drives his own used car, refuses to occupy the Los Pinos presidential mansion, and is selling Mexico’s fleet of armor plated cars, jumbo jets, and assorted mobility perks so coveted by leaders of state.

AMLO flies coach. His travel plans are not a state secret. I’d heard AMLO was coming to Guadalajara but had no expectation he’d emerge just steps from where I awaited my flight. So, seeing our president-elect walk off an Aero Calafia flight, I lurched into action. I leapt from my café chair and dashed ahead of the growing throng. I snapped a foto.

AMLO continued toward me. With no security shield to stop me, we were suddenly shaking hands and walking side-by-side, talking privately while a mob of media snapped and clicked. I could have wasted the opportunity for a dehumanizing selfie; instead I used the time for a bit of transnational lobbying. Out came “I’m part of the expat community, living as a permanente in Chapala.” He responded, “Ah, I remember there are many foreigners living there.”

I continued, telling our future president and Mexican Messiah how we expats could have gone anywhere on the planet, but found our way to a Lakeside string of communities, willing to accommodate our life 2.0 ambitions.

I told him “We want to be part of the Mexico you were elected to deliver. We are Mexico’s ally and want to participate in the transformación, telling the world the realities of this remarkable country.” (Or that’s how I remember it going down…)

AMLO listened, but was soon swept into another conversation with a local farmer, no doubt of more pressing concern. I had had my 15 seconds, and AMLOVE was now my man.

I had just committed the entire “expat” community to become de facto ambassadors. Some of us would embrace this opportunity to tell the world the joys and rewards of full-time Mexico living. Others would prefer to stay in the frustrating sphere of “How come they don’t…?” and questioning every daily challenge.

Maybe we can start by agreeing what to call ourselves. Let’s start with “Americans.” Geography tells us we are all norteamericanos. America is a hemisphere, two continents, and the moniker we should all rally around. The term has been misapplied, hijacked for political jousting, and lost its true relevance.

Most Mexicans are quick to label us gringos, gabachos or americanos. Let’s put a finer point on our identity. I prefer Estadounidenses to sync up with our neighbors, the Canadienses.

Then let’s figure out if we are invaders or part of the communities we inhabit. Whatever name you adopt, let’s agree America is home for us all.

Ed. Note: Greg Custer lives at Lakeside as a permanente, and has worked in the international travel industry for 40 years.