JAMES HILTON—The Man with the Magic 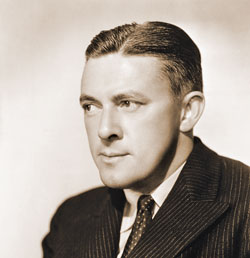 Some months ago, this column rendered an opinion as to what was the best novel ever written. Our choice was Victor Hugo’s Les Miserables, and we hope we provided enough empirical evidence to support such a selection.

This month’s column is far more subjective as it deals with our favorite novelist of all-time. Early on, that author set forth his credo: “Surely there comes a time when counting the cost and paying the price aren’t things to think about anymore. All that matters is value—the ultimate value of what one does.”

Over the course of his relatively short life, James Hilton published 20 novels, many short stories, and several works of non-fiction. More astounding is that over an 18-month period in the late 1930’s and early 1940’s, he wrote three international best-sellers in a row and won an Academy Award for Best Adaption for his script of the book, Mrs. Miniver. That film is famous for another reason.

In the early 1940s, Britain stood alone against the Hitler Murder Machine, and the film is about one family and what they did to help bring back to safety the remnants of the British (and French) Army stranded at Dunkirk. Greer Garson (British by birth) won the Oscar for Best Actress in the title role in the film, and in accepting the award in Hollywood she made an impassioned plea to those still not totally dedicated to the defeat of the Nazis to come to Britain’s aid. (The United States would not come into the war until the attack on Pearl Harbor.) She spoke for more than forty minutes and not a single soul in the spellbound audience rose to protest. Indeed, when it was over, Miss Garson received the longest ovation in the entire history of the Oscar ceremonies.

As for Hilton’s literary trifecta of three international best-sellers in a row, they were Goodbye, Mister Chips, Lost Horizon and Random Harvest. The first novel was about the retirement of a master in a small private school in England in the early 20th century. Hilton’s own father had been such a teacher, and that surely helped give the novel its enormous emotional power.

Lost Horizon would make the word “Shangri-la” known all over the world, a mythical place high in the mountains of Tibet where peace and serenity perpetually prevail. From that time on, the word was synonymous with Mankind’s quest to find just such a place, if only in its heart.

Random Harvest is the story of a British officer, who having lost his memory, ends up in a military hospital after the First World War. Later, he falls in love and marries a young woman, has a son and settles down to a life as a budding writer. But a few years later, in another town where he has gone to be interviewed for the editorship of a small magazine, he is hit by a truck in heavy traffic, and though only slightly injured, the accident serves to restore his original memory, but clouds his most recent background, including his marriage. How he and his wife (again, played in the movie by the magnificent Greer Garson) are eventually reunited is the stuff of “magic” that only the very best story-tellers in the entire world seem to possess.

If the novels were enormously popular, the movies made from them only enhanced Hilton’s reputation. (The majestic Ronald Colman starred in the last two movies mentioned above.) Hilton spent his final years working as a top screen-writer at MGM, then known as “The Rolls Royce of all the fantasy factories in the world.” He would also work with Alfred Hitchcock on the superb Foreign Correspondent, and in previous years had penned the screenplay for Greta Garbo’s most famous film, Camille.

Given all of the foregoing, to say that James Hilton remained faithful to his commitment to ultimate value is, we think, an enormous understatement.