Shame On The Cowards! 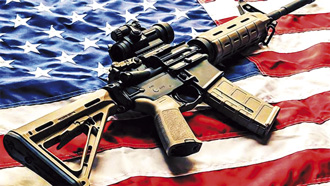 The script for Congressional Cowards after a shooting massacre: Speaker Paul Ryan has already said, true to the playbook, that we shouldn’t rush to conclusions, that we need to get the facts. He said that now is not the time to politicize the tragedy. A congressman replied to Speaker Ryan, “We already have the facts: Children have been murdered!” Governor Rick Scott (R-Florida) said about the same thing as Paul Ryan.

Congress would not dare debate a gun bill while feelings of anguish are high. If they vote on anything, they will wait for the public to forget and for people to get on with their business.

And then they will vote to allow mentally incompetent people to buy firearms and Trump will sign it.

This is literally true, and it’s the only signing for which Trump will not allow any pictures to be released to the media – although they exist. Ordinarily, he makes a big production out of his signings, and holds the signed bill up for the cameras (Hey, look, I can write my name!)– but not the bill to allow mentally incapacitated people to buy guns.

The killer is 19 years old. In Florida, he cannot buy a beer, but he can buy an AR-15 assault rifle. One father of a daughter in the Florida school said, “I’m tired of your thoughts and prayers. Do something!” There is a general ridicule of “thoughts and prayers.” As a result, for this massacre, “thoughts and prayers” appear to have been worn out and politicians are finding other expressions that are the same thing, but at least, a slightly different wording, such as “My prayers and heartfelt sorrow go out to the families.” But it’s only a substitution and still follows the playbook.

Cowardly Congressman: “Oh, I’m so sorry about your kid being shot to death at school. But I’m not sorry enough to stop taking political donations from the NRA.” Senator Rubio has received $3.3 million from the NRA. He said after the shooting, “I don’t know of any law that would have prevented this shooting.” He voted against a ban on the military assault rifle called an AR-15. An AR-15 is what the shooter used to kill 17 kids at the Florida high school. Senator Marco Rubio has an A+ rating from the NRA. The NRA newsletter lauded Governor Scott for signing more pro-NRA bills than any other governor, and they give him an A+ rating, also.

Yep. That’s how it works. An AR-15 sells for between $1,200 and $1,800 each, and over 1.5 million of them are sold each year. That’s over $2 billion a year. The AR-15 is big business – yet it’s a gun that belongs only in military combat. It’s a weapon that turns human flesh into what looks like bloody hamburger.

In my opinion, all the families involved in every school, movie, restaurant, nightclub, etc. shooting should get free airtime for a television commercial to be aired on all channels naming and showing pictures of the officials who refuse to vote on reasonable gun legislation.

One mother’s statement: “The gunman, a crazy person, just walks right into the school, knocks out the window of my child’s door, and starts shooting – shooting her! Killing her!”

“You can stop the guns from getting into these people’s hands. This is not fair to our families, that our children go to school and have to get killed. President Trump, please do something! Do something! Action! We need it now! These kids need safety now!”

“I wish I could include a link to a video, but the woman had just spent two hours planning her daughter’s funeral, and you can imagine the anguish in her voice.”

CNN reported that students are speaking out and demanding action. At least one student had a chance to voice his opinion on the CNN news hour. He is David Hogg and he said:  “What we really need is action. Because we can say, ‘Yes, we’re going to do these things, thoughts and prayers.’ What we really need more than that is action. This is the 18th one this year. We’re children, you people are the adults. Take action, work together, get over your politics and get something done.”

Editor’s Note: Here are a few facts that came to light after this most recent school shooting in Florida: Some 94% of the public is in favor of much stronger gun laws. A very large percentage of the members of the National Rifle Association are also for tightening the laws regarding gun sales. About the only factions opposing such common-sense legislation are the leaders (whose salaries are astronomical) of the NRA, the gun-makers in the United States and the spineless politicians in Congress who have been bought, “lock, bump stock and barrel” by the NRA.

Dozens of so-called “public servants” receive many tens of millions of dollars in campaign funds to make certain that laws that might truly protect all Americans never even come to a vote in Congress.

John F. Kennedy’s Profiles in Courage was about historical figures in American history that put principle over power and in the process became political icons—would that we had more of them in Congress today! I wonder what fate might befall a young, idealistic politician who might someday say, “If it’s a matter of choosing between our country’s young people and those who manufacture assault weapons, I don’t want their money. I stand with the young people!” I like to think that he or she would be overwhelmingly elected.

Finally, one has only to look at the gun laws in Mexico to realize the benefits of reasonable gun-control. Here in our beloved adopted land, it is well-nigh impossible to buy a hand-gun, and God help you if the authorities discover that you have a weapon like an AR-14. It would go better for you if the police found you had filled your garage with heroin. One result: never in all of Mexican history has there been a single instance of someone walking into a school and dealing out death and dismemberment on innocent Mexican children.

Oh, but there has to be a downside to Mexico’s stricter gun laws, right? No, none. People still come from all parts of this area of the world to enjoy hunting (with licensed rifles) in Mexico. And if you’re wondering where the cartels buy their ghastly weapons? That’s easy: in the United States!