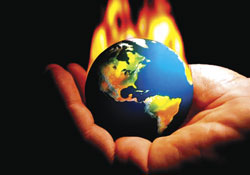 Good movies can not only be highly entertaining, but instructive, as well. A recent viewing of All the President’s Men, the 1974 Robert Redford/Dustin Hoffman movie about the two young reporters with the Washington Post whose investigative skills would eventually bring down the Nixon presidency had a few key scenes where the advice “Follow the Money” would eventually also spell doom for several of Nixon’s merry little band of mischief-makers. The shadowy figure dispensing the advice (always late at night in an underground parking lot) was much later revealed as having been Mark Fell, a high-level official with the Federal Bureau of investigation.

That advice has been much on my mind as I, along with many others here at Lakeside, try to make some sense of the debate over climate control. But one thing sure: the people who are most heavily invested in denying the premise of mainly man-made global warming are exactly the people who would financially profit most if the governments of the world fail to take any meaningful action to  curb such warming. Such people are the men and women who run the major gas and oil corporations and the politicians and/or paid advocates who are so deeply in their pockets.

Still following the money, it is established fact that some 97% of the world’s scientists whose expertise is mainly in this field believe that the planet is headed for catastrophe unless such warming is drastically curtailed—and equally obvious that they have little if any financial motive for taking such a position. Indeed, for many of them, their lives have been turned upside-down because of the scientific conclusions they have published.

To combat such conclusions, many politicians are disposed to start any discussion on the subject by saying, “Well, I’m no scientist but—” Usually such an admission would cancel any further consideration of their opinions—but in the current Alice in Wonderland atmosphere in Washington and elsewhere, ignorance has become an attribute!

Yet for some time now, the headline for the crisis could well be: GLOBAL WARMING: Case Closed. In the summer of 2013, a U.N. Report offered irrefutable proof that the planet is headed for catastrophe—and that human activity is altering our world in profound and adverse ways. Shortly thereafter, The New York Times stated that “Babies being born now could live to see the early stages of global calamity.”

One of the many irrational responses from the global-warming deniers was from the CEO of an oil company, who while accepting some of  the statements made by the world’s most prominent scientists regarding the imminent dangers of global warming, has bemoaned “But what good is it to save the planet if humanity suffers?”

On a somewhat related subject, most of those screaming for another war in the Middle East (“Bomb, bomb, bomb Iran” is one of the many mindless chants one hears these days) might change their minds if members of their immediate families were drafted to be the first to go overseas. They also seem to have a profound case of Selective Amnesia: have they forgotten that the last two wars in that part of the world turned out to be unmitigated disasters? Even George Will, the Intellectual High Priest of the Far Right, has called the invasion of Iraq and Afghanistan the two greatest foreign policy blunders in all of American history!

Meanwhile, we are left to wonder how many of the advocates of the fossil fuel industry would still be so steadfast in denying global warming if members of their own families were the ones placed most at risk?