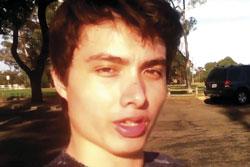 Shots have been fired at 74 American schools and two military bases in the 1 ½ years since the Sandy Hook massacre. With few exceptions, they were fired by young white males at other white Americans.

The statistics tell us we should be more fearful of gun lobbyist Wayne LaPierre than al-Qaeda. In the decade following 9/11, only 33 Americans were killed by Muslims, while 150,000 were killed by guns. That’s a ratio of 4,545 to one.

There is rage in America. We see it on clogged freeways, called “road rage” where frustrated drivers will get out of their pickup and assault another driver, shoot him, or bang into another vehicle with a bigger one. And then there are the endless shootings.

Texas has an organization called “Open Carry Texas.” Senator John Cornyn (R-Texas) is up for reelection. His campaign advertises his support for an open carry law. Small groups of them go into chain restaurants with assault rifles and ask for service. They assure startled customers that they’re not there to hurt anybody – they’re just exercising their Second Amendment rights. Well, thanks for the assurance, but maybe it would be better just to leave the assault rifle at home – or not to own one in the first place.

There’s a lot of rage directed at Muslims, with defacing of their mosques and attempts to prevent their construction. And there’s plenty of hatred of women, with Rush Limbaugh calling Sandra Fluke a slut and a prostitute – multiple times, for the hateful gratification of millions of listeners. Hate and rage, hate and rage.

One of the most shameful examples of rage, doubtlessly based on racism, was the behavior at the California town of Murrieta. Three buses of 140 Central American children were prevented entry into the city by an angry mob. They were carrying plenty of signs as they blocked the street. Signs that read, “Go Back to Mexico.” “No Illegals Allowed.” Things like that. The government was trying to carry out American law and moving the children to expedite their hearings. As Homeland Security Secretary Jeh Johnson said, the protesters were interfering with due process of law.

And there were the obscene chants. The children must have been terrified. The event was made festive by waving American flags all over the place. Ironically, the U.S. is responsible for many of the problems that plague Central America because of ruthless right-wing dictators we propped up there. As Chris Matthews described it, our hands are not clean.

A case study of rage that surely has wide application is that of Elliot Rodger, 22 years of age. His father is a movie director and Elliot drove a BMW. Elliot’s rage drove him to kill six people. Rage is a great stimulus for action and loss of judgment.

A Hollywood screenwriter and family friend, Dale Launer, knew Elliot Rodger to be shy, with a crippling lack of confidence, and an inability to take action of any kind. When he did finally take action, it was tragic.

On a video he made before his shooting spree, Elliot compared his gun to his sexual organs. He complained on the video about women sexually rejecting him and was bitter that he was still a virgin. He complained that beautiful women gave their sexual favors to other men, but not to him. He said about his new gun purchase, “Now I’m the alpha male.”

That seemed like a powerful confirmation of the Freudian idea of a gun being a phallic symbol. That might be the motive for those men who have been going into restaurant chains in Texas brandishing their assault weapons. Freud might say they suffer feelings of sexual inadequacy and guns make them alpha males, just like Elliot Rodger.

The video that Elliot Rodger made is available on YouTube. Knowing now what he was about to do, the video is unnerving. Young Elliot smiles with satisfaction when he describes the killing he is about to do, saying, “This is the day of retribution.”

It was no accident that an English rock band in 1975 named itself “The Sex Pistols.”