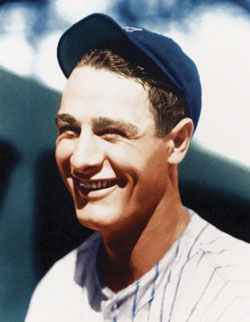 (This past July 4th marked the 75th anniversary of what baseball historians call one of the greatest moments in all of American sport. In honor of that moment and of the man who today is widely considered one of the most beloved athletes of all time, we decided to re-run what follows here.)

In the great wave of European immigrants who came to the United States toward the end of the 19th century was a certain German family named Gehrig. In 1903, they had a son, Henry Louis Gehrig, who would become a legend in his own lifetime.

But long before that time arrived, Gehrig’s mother had been lucky enough to find work as a cook in a fraternity house at Columbia University in New York City, where Gehrig later enrolled, hoping to earn a degree in engineering. But something stood between him and obtaining that degree: an awesome, God-given talent for playing baseball, a gift which would soon land him with one of the greatest franchises in the history of sport, the New York Yankees.

But his most memorable achievement was playing in 2,130 consecutive games, a record which went unbroken for more than 50 years, and earned the incredibly durable Gehrig the nickname “The Iron Horse.”

When Gehrig finally came out of the Yankee lineup, it was only because he had developed amyotrophic lateral sclerosis, a hideous disease which is today known as Lou Gehrig Disease. A short while later, he was honored at Yankee Stadium, and before a crowd of more than 50,000, he gave the audience one of the most emotional moments ever recorded in the history of American sport. His speech opened with, “For the past two weeks you have been reading about a bad break I got. Yet today, I consider myself the luckiest man on the face of the earth.”

One year later, the famous film producer Sam Goldwyn (equally infamous for his mangling of the English language, as well as common logic) was offered the chance to make a movie of Gehrig’s life story. However, knowing little about baseball, he declined. Then he was shown a film clip of Gehrig’s farewell speech and afterwards, with tears running down his face, Goldwyn declared “I’m going to make this film, even if it doesn’t make a dime—as long as millions of people see it!”

And millions of people did see it. The Pride of the Yankees starred the redoubtable Gary Cooper; perfect casting, for both Cooper and Gehrig epitomized what was best in the American character: good, strong, dedicated men who went about their work with very little fuss or fanfare.

Indeed, for most of his professional life, Gehrig had labored in the shadow of teammate Babe Ruth; flamboyant, free-wheeling Babe Ruth, who leveled opposing pitchers, loose ladies and bourbon bottles with equal gusto, while Gehrig lived quietly, devoted to his wife and to his work with under-privileged children.

Today, in an era of pampered athletes, illegal strength-enhancing steroids, monstrous salaries, out-of-control egos and cynical media manipulators, Lou Gehrig still stands, some 75 years after his death, as a silent sentinel guarding what is left of integrity in the world of professional baseball.

Sometimes, the greatest game of all is how a man lives his life.