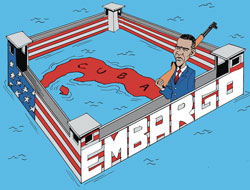 Cuba is an allegory for all Latin America, because hardly one of those countries has escaped being pushed around by the bully to the north. No Latin nation has lost more to the U.S. than Mexico – half their country. But Cuba also ranks high on the list of Latin countries with grievances.

The U.S. feared that the Cuban rebels would win their fight for independence from Spain and then keep the U.S. out of their economy.

The result of American interference in Cuba’s struggle was the Platt Amendment, which gave the United States the right to intervene in Cuba, and an eternal lease on Guantánamo Bay. The Platt Amendment was incorporated into the Cuban constitution as the price for American withdrawal. There followed a series of American backed dictators and economic control of Cuba. American companies controlled 100% of Cuba’s utilities, mines, cattle ranches, and oil refineries. Americans controlled 40% of the sugar industry, and 50% of the public railways. While great wealth was being extracted from Cuba by American business interests, Cuban workers were reduced to impoverished subsistence. Before being too quick to judge Castro, one should consider how much better off the average Cuban is under Castro than under American imperialism.

In 1959, Fidel Castro’s revolution overthrew the American-backed dictator Fulgencio Batista. Castro expelled the American Mafia, which had gained a stranglehold on Havana under Batista. Castro set up a nationwide system of education, of housing, of land distribution to landless peasants, and a first class universal healthcare system. His government confiscated over a million acres of land from three American companies – including United Fruit. Cuba needed money to finance these social programs and the United States was not about to lend it.

When Cuba signed a trade agreement with the Soviet Union, American oil companies in Cuba refused to refine Soviet crude. Castro seized these companies. The U.S., in retaliation, banned the import of sugar, Cuba’s main source of revenue. The Soviet Union immediately agreed to buy all of Cuba’s 700,000 tons of annual sugar production that the U.S. would no longer buy.

The United States decided to overthrow Castro and restore American interests in Cuba to Americans. To this end, the CIA sponsored an army of anti-Castro exiles to invade Cuba, some 1,400 of them.They were right-wingers and were among the few Cubans who had personally profited under American imperialism. In 1961 they landed at the Bay of Pigs, expecting Cuban dissidents to join them in overthrowing Castro. They and the CIA underestimated Castro’s popularity in Cuba. Castro crushed them in three days.

The fiasco of the Bay of Pigs violated international law, because the U.S. had repealed the Platt Amendment under F.D.R’s “Good Neighbor” policy. Under Truman, the U.S. had signed the Charter of the Organization of American States, which forbids any state of the organization to interfere, under any circumstances, in the affairs of a member nation, which included Cuba. Kennedy authorized the use of American warplanes and four American pilots were killed in the attack on Cuba.

It seems in retrospect that we practically pushed Cuba into Communism. No U.S. policy seems more maladroit than our Cuba policy. Americans from the “Land of the Free” don’t have the freedom to travel to Cuba. But Canadians, Mexicans, and all Europeans have that freedom. The U.S. doesn’t allow trade with Cuba, but we had a bountiful trade with Soviet Russia, selling it tons of wheat, and now we trade with Communist Vietnam. And don’t even mention Red China! Not only is almost every item in Walmart made in China, we borrowed heavily from them to pay for Afghanistan and Iraq!

What’s so wrong with Cubans? Why can Americans visit other Communist countries, but not Cuba? Is this crazy, or what?