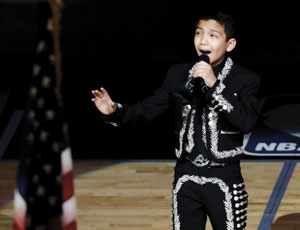 President Kennedy gave his civil rights speech 50 years ago in what the New York Times calls “Kennedy’s finest moment.” It was the beginning of the Civil Rights Act of 1964, signed by his successor, Lyndon Johnson. Racism is no longer the evil of “whites only” signs, but it’s still pervasive. Racism impels every back-biting attack against President Obama, including Rush Limbaugh playing “Barack, the Magic Negro” on air, to the tune of “Puff the Magic Dragon.”

Racism inspires the “birthers” who doggedly want Kenya to be Obama’s birthplace. And racism motivated Congressman Joe Wilson (R-South Carolina) when he yelled, “You lie!” as the president delivered a major address before Congress. In Wilson’s case, it was double racism, because the president had just stated that health care reform would not mandate coverage for undocumented immigrants. Wilson’s insult was aimed at both Obama and Mexicans.

I had a favorite teacher whose name was Ernesto Márquez. He taught me a lesson in the 50’s outside of class that had nothing to do with music. He was from Laredo, Texas and as a teenager had saved some nickels and dimes to impress his girlfriend with a hamburger. He took her into a Laredo cafe and the manager told them to get out, because “We don’t serve Mexicans here.” Mr. Márqez said, “You don’t know how that feels until it happens to you.” He was my hero, so I almost felt like it had happened to me. He told me this story at the height of racial segregation in the South and he was trying to teach me that it was wrong. He succeeded, years before the 1964 Civil Rights Act.

Racism seems even more obscene when it targets children. But that’s what happened to Ernesto Márquez. And all these years later it still happened to Sebastien de la Cruz after he substituted at the last minute to sing the national anthem at game three of the NBA Finals. He is a boy soprano eleven years old and has a powerful and beautiful voice. He enthused the crowd, but a torrent of nasty Tweets followed. This one was typical: “This kid is Mexican. Why is he singing the national anthem? You’re not American. Go home.” Sebastien’s passion is mariachi music that originated in our state of Jalisco and the costume must be what offended the paranoid nuts out there.

Gregg Popovitch, coach of the San Antonio Spurs, was impressed by Sebastien’s singing, so he defied the bigots by inviting Sebastien to come back to sing for the fourth game. President Obama urged people to listen to him sing at Game Four. San Antonio’s Mayor Julian Castro and his wife escorted Sebastien onto the court and introduced him. Mayor Castro told him, “Don’t let a few negative voices get you down.”

Sebastien said at a news conference, “My father was actually in the U.S. Navy for a really long time. People don’t know; they just assume that I’m Mexican. But I’m not from Mexico. I’m from San Antonio, born and raised, a true San Antonio Spurs fan.”

Millions of Latinos will remember that Mayor Castro was a spellbinding keynote speaker at the Democratic Convention. In seven years Sebastian will be old enough to vote and he will remember who came to his defense when he was bigotry’s child sacrifice. I think normal people would say Sebastien is a cute kid and that his costume is part of his charm. He’s a cosmopolitan orchid beset by provincial turnips. To hear an impressive performance and see what the uproar is all about, this is the link: