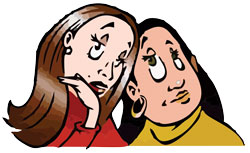 (Note: Given the events here at Lakeside over the past few weeks, we have decided to re-run an editorial that was first published several years ago. In these difficult times, we should not make things worse by “turning up the volume.” Instead, we should stay calm even while remaining extremely vigilant.)

William Shakespeare said it best (as he did almost everything!) some 400 years ago, when he put something like the following words into one of his immortal plays: “He who steals my purse steals nothing. ’Twas mine, ’tis his, has served a thousand masters. But he who filches from me my good name, steals that which not enriches him, but makes me a poor man indeed.”

Here at Lakeside, this same type of theft occasionally reaches alarming proportions; perhaps one price we pay for living in a “paradise.” In our tiny corner of Mexico, news travels swiftly, unfounded gossip even faster.

Yet among people of character and accomplishment (and there are thousands in our midst), such feckless activity is easily cast aside. These people are far too busy leading active and productive lives, as they quietly go about adding to the culture and beauty of our area, even as they work to improve the lives of those less fortunate amongst the Mexican population.

However, the spreading of unfounded rumors is an act of omission, as well as commission; the former more insidious, as it can affect even those who would never engage in the dissemination of malicious gossip.

It goes something like this: you’re at a gathering, and someone voices a vile and unsubstantiated rumor about a person you respect, or a situation you know is not true. Yet rather than challenge the gossip monger, you remain silent. Then, when other people, aware of your friendship with the person under attack, or knowledge about the situation, turn to get your opinion, you mutter, “Oh, really? I didn’t know that.”

Such a response only serves to further validate the rumor, and hence speeds it on its character-crippling or hysteria-inducing way. Yet this response is, if not commendable, at least understandable. Most of us here at Lakeside have already fought the major battles in our lives, and have come to Mexico hoping to live in peace with our neighbors. The last thing we want is to be disliked. So we remain silent, even in the face of callous character assassination, or the promulgation of unfounded rumor.

Many Mexicans, however, are made of stronger stuff. It is rare for one Mexican to unjustly condemn another. Among these people, the spreading of hateful gossip or unconfirmed stories are considered a game for fools; an act which they know diminishes the dignity of not only the person defamed, but the purveyor of the rumor, as well.

We foreigners would do well to emulate the behavior of our hosts. But if conscience cannot guide us, there is in Mexico yet another “regulator.” This country has the most stringent slander and defamation laws in all of the Americas. In the U.S. and Canada, a person is often allowed to say anything he pleases about anyone he wishes, regardless of how unfounded or harmful it might be. But in Mexico, such words against a private citizen can quickly land their purveyor in jail.

I sometimes think our hallowed right of freedom of speech is often squandered on imbeciles and knaves. Perhaps Mexico, in this one regard, is far more enlightened than its two “freer” neighbor- nations to the north.