By Shep Lenchek
(From the Ojo Archives) 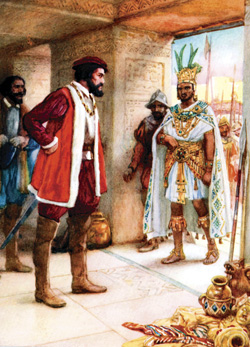 The high priests of the Aztecs were frantic. Their tribe had lived comfortably in what we now call the Valley of Mexico since 1325 and built a capital, Tenochtitlan, in Lake Texcoco. Because their myth of creation told that the sun had been still-born, moving only when offered a human heart, freshly torn from a living body, they needed daily sacrificial victims. Only a constant supply of blood would postpone the final destruction of their world.

But in 1519, things were going wrong. For the past few years, there had been droughts, floods, frosts and famines. They had dragged thousands of humans up the 114 steps that led to the top of Tlaloc´s pyramid where their hearts, still beating, were offered to the God, hoping for a return to normal rainfall and weather. It was all they knew how to do.

They also believed that their gods responded only to the organs of brave warriors, captured in battle. This dogma would prove fatal, for though they ruled an area that stretched from the Atlantic to the Pacific, it was not really a kingdom.

Each tribe simply paid tribute to the Aztec Emperor. Also, they deliberately refrained from subjugating some of their more war-like neighbors. They needed them for sacrificial material. Hatred of the Aztecs by the Tlaxcalans and Cempoalans would play an important role in the military defeat of the Aztecs.

Then news reached Tenochtitlan that the country had been invaded by white-skinned, long-haired, bearded people from the east. Was this the legendary Quetzalcoatl? A benevolent God/Emperor, he had ruled the Aztecs, then sailed off to the east. Legend had it that he would someday return. Reports also said that some of the invaders were super-natural: half-man, half-beast. Arrows could not kill them.

Hernan Cortes arrived in Mexico with armor-clad men, some mounted on the first horses the Aztecs had ever seen. History describes Cortes as the man who destroyed the Aztecs. Actually, he was but the catalyst. The Aztec Empire fell at the hands of those it had subjugated and abused.

The people themselves disappeared when disease, slavery and the total failure of the Spanish settlers to understand and protect the environment led to a population crash and finally extinction. Sailing from Cuba in February of 1519, Cortes had orders to reconnoiter, bring back gold and silver, liberate any Spanish prisoners the natives might hold, look for another Spanish explorer, Juan de Grijalva and thereafter return to Cuba.

The plan to conquer Mexico, hatched by Cortes, was never approved by his superiors. First stop was Cozumel, where he did find Geronimo de Aguilar. Shipwrecked, he had been a prisoner for two years and spoke the Mayan dialects. Then on to Tabasco where Cortes met some resistance, quickly overcome. Before he left he won over the Tabascans by showing them respect and treating them gently, though he had defeated them.

In return they gave him Marina, a woman of a noble Aztec family who understood the languages of the Mayans as well as the language of the Aztecs. Called “La Malinche” by the Spaniards, she remained with Cortes, first as interpreter, then secretary, and finally mistress.

Bernal Diaz, a member of the expedition whose book, The Conquest of New Spain gives a complete eyewitness report of events, says that she was the most important gift Cortes ever received. She spoke no Spanish, so translated into Mayan. Then de Aquilar translated into Spanish. Soon, she learned Spanish and replaced de Aguilar completely.

Moving on to Vera Cruz, Cortes again met armed resistance but the combination of firearms, armor and fear-inspiring mounted men, enabled the Spaniards to defeat the Aztecs. Now Moctezuma himself intervened, sending envoys with gifts of gold and jewels, who begged the invaders to leave the country. This had an exactly opposite effect on the Spaniards. Now, with concrete evidence of the wealth of the Aztecs, they determined to move forward.

Had Moctezuma ordered an all-out attack on the invaders, the course of history might have changed. He could have raised an army that outnumbered the Spaniards by more than 1000 to one. Perhaps his indecision was based on the report of Quetzalcoatl´s return. By the time Moctezuma made up his mind to resist, it was too late. Cortes had met the chiefs of Cempoalla who asked his aid against Moctezuma and promised to be his allies. Cortes accepted and started to convert them to Christianity.

Again, he consolidated his position by giving gifts and treating all with great respect. Secretly, he sent gifts to Moctezuma, declaring his friendship and asked permission to visit him. With his flank secured by his alliance with the Cempoallans, on August 16, 1519 Cortes moved toward the Aztec capital. The expedition numbered 400 infantrymen, 15 cavalrymen and 6 canons, as well as 1300 Indian warriors, plus 200 other natives to carry equipment. He left behind 900 soldiers and four horsemen to insure the co-operation of the Cempoallans and to guard against any forces sent from Cuba to stop him.

His first encounter with the Tlaxcalans resulted in battles but while defeating them, Cortes so impressed them that they now sought him as an ally against the hated Aztecs. When he left, Tlaxcala on Oct. 13th, 6000 Tlaxcalan warriors went with him. At the very same time, another unseen but even more deadly invader was moving toward Tenochtitlan: Smallpox.

On the 8th of Nov. 1519, he and his army entered the city peaceably, the guests of Moctezuma. What happened thereafter is also common knowledge. However, on “The Sorrowful Night” of the 1st of July, 1520, the invaders fled, suffering heavy losses. If it had not been for the Tlaxcalan haven, none would have reached the coast alive. The years of Tlaxcalan mistreatment by the Aztecs had doomed Tenochtitlan. Cortes remained in the haven for five months and re-grouped.

By December, 1520, Cortes commanded 520 Spanish infantrymen, 40 horsemen, 9 cannons. He also had 150,000 Indian allies. Again they headed for Tenochtitlan, where a small-pox epidemic was raging. Cuitlahuac, who had succeeded Moctezuma as Emperor, died of the disease. The new ruler, Cuauhtemoc, resolved to defend the capital to the last man.

On August 13, 1521, after a 75-day siege, the city fell, almost totally destroyed. Perhaps as many as 150,000 Aztecs died, at least 40,000 from small-pox. Though held captive, the Aztecs were treated by Cortes with respect. Cuauhtemoc was still regarded as the Aztec Emperor. Tenochtitlan was rebuilt. The end of the Aztec Empire came in February, 1525, when Cuauhtemoc was put to death.

But the final demise of the Aztecs did not come about from military action. Disease and slavery plus the Spanish settlers’ destruction of the environment by deforestation and over-grazing delivered the final blow. In 20 years, they turned once fertile fields into a wasteland. Loss of land on which to raise corn—the Aztec staple food, led to a population crash and extinction. Ultimately, they fell to the very forces of nature they had feared and sought to appease by offering thousands of human hearts.

By 1600, the Aztecs were extinct. Many of the conditions that destroyed them burden Mexico today. Vast, once fertile areas are still desert. Corn production no longer meets demand. Perhaps we all must await the return of Quetzalcoatl.